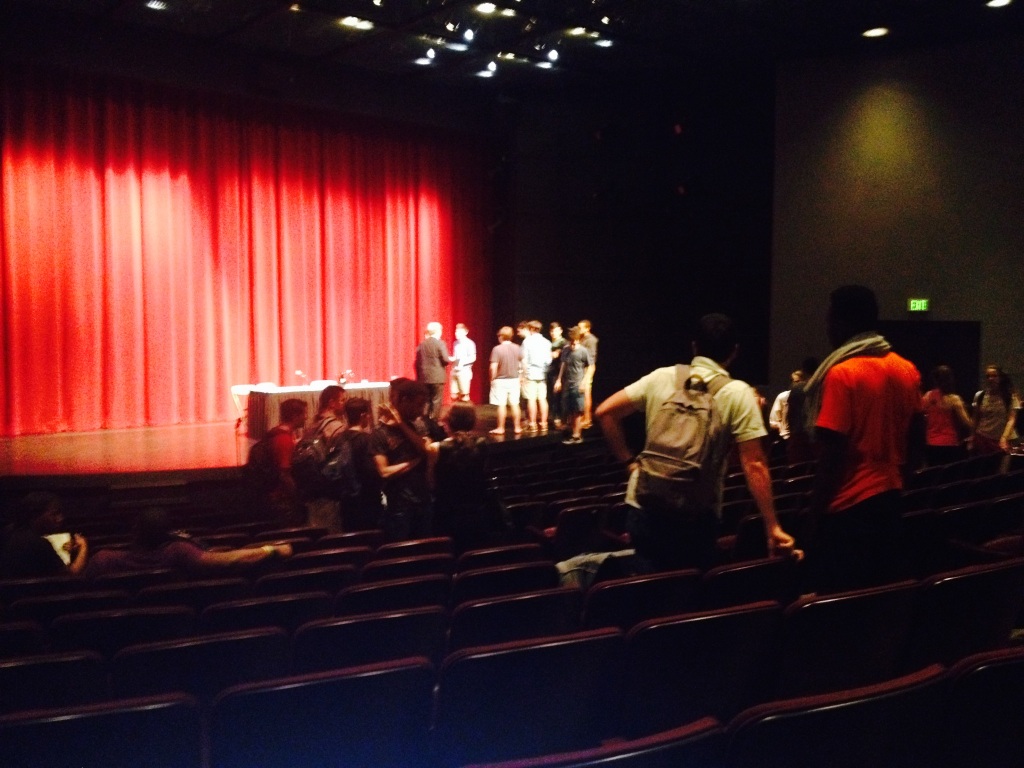 Tonight, I will be covering the open meeting with the student body about the trustees’ decision to ban fraternities on and off campus.  The trustees joining us will be Cullen Murphy ’74 and Andrew Nussbaum ’85.

6.28  It is two minutes before the meeting, and Kirby Theater is halfway full.  Biddy has made a presence here, as well as three members of the police dressed in ordinary clothing.

6:31 Trustees have stated that it is their hope that this be a conversation within the Amherst community, after asking if any students are present who do not attend Amherst.

6:32 Cullen Murphy is introducing Andrew Nussbaum, who he calls “Andy”.  Andy is currently a lawyer in New York, and was here when fraternities were abolished in 1984.

6:35 Murphy states “Many of the board members were part of fraternities.  The role of the board is not to micromanage.  The board’s job is to address broad policy.”

6:37 Murphy states “The goal of the 1984 decision was not to push fraternities underground, but to abolish them entirely.  We must have policy and procedures under place.  We do not intend for some future meeting to look back on this one and come to the same conclusions.”

6:41 Male in white shirt asks why there was no student input in coming to the [April] Board decision.  He says it seems that the trustees have already arrived at the decision of how to revise the honor code without student input.

6:43 Murphy says there are some principles that would never make it into the honor code.  Murphy gives “plagiarism” as an example.  The trustees hold power through a charter to assert particular principles.

6:45 Andy admits that there are pros and cons to the decision.  The board thought about it for more than a year, and it was difficult.

6:46 Yoni Rechtman (’17) asks, “What plans do you have to replace these invaluable support groups [referring to fraternities]”?

6:49 Murphy says,”When Biddy Martin first came to the college, she spoke to the board about profound changes needed to the college’s social life.  The board has been unanimous in saying that she will have the support that she needs.”

6:51 Andy says that the board on its own is not able to create any type of social structure on campus.  The best they can do is provide resources and support.  It will require the input of students to bridge the deficiencies.  The long term solution will be in a strategic planning committee that will include students.

6:53 Another male says it is interesting that they didn’t choose the decision to “bring the fraternities into the light”.  Another solution would be to make them “regulatorily viable”.  Especially since the college is under scrutiny for sexual misconduct.

6:56 Same male points out that there are other groups on this campus that are single sex.

6:56 Andy replies that there are no other groups whose behavior and activities are not under the oversight of the college and administration.

6:57 Another male says that the trustees have ignored the mental health aspect of the fraternities.

7:00 Will Kamin, the president of Chi Psi, says, “The United States itself has many things in its past that it is not proud of.  As a fraternity member, I think it is fair to say the same about fraternities.  As the US has reformed over the years, so have fraternities.”  Fraternities are very different today than they were in 1984.

7:03 Murphy says that Andy and him have read all of the testimonials sent to him about members’ personal fraternity experiences.  They were touched.  But the board was left to two choices–“we will not have a system like this period, or we will invite the old system back on campus”

7:07 Judith Frank is the chair of the Committee on the Integration of Curricular and Co-Curricular Learning.  This committee has been working for a year talking to students about how to create better environment for students on campus.  She realizes that fraternities have benefited from a small group mentorship and coaching that many students would benefit from on campus. Frank urges students to talk to her about their suggestions for improving student life.

7:09  Frank–“We are ranked number one in overwhelmed, lonely, and sad”.

7:10 Male says that the board of trustees have refused to renovate facilities, even when alumni have offered to support these structures.  Seems to be off-topic.

7:12 Male explains he meant that the Board of Trustees was using the fraternities as a scapegoat for the college’s issues.

7:13 Andy says no institution should do something just because others offer to pay for it (referring to why the board has not renovated facilities).  Too many risks in building the intended science center, and they have invested their resources in a better and smarter science center plan.

7:16  “What we’ve seen Biddy Martin do is throw money at problems”  Student does not think that Martin is addressing the relevant social problems.  He follows with, “I think that most students would prefer that instead of renovating the power plant, we renovated the gym.”

7:20  Another male says, “In the honor code, it says that violations that occur off campus are still punishable.  So violations that occur in fraternities off campus are still punishable.  Seems that those offenses are already dealt with under the honor code.”  He suggests the college DOES have oversight, which directly opposes a reason spoken earlier for banning fraternities.

7:21 Another student reads from the 1984 College Council Statement on the Fraternity Policy that says that students were free to associate with whomever they wished off campus.

7:22 Murphy, “Is that the 1984 statement that does not have the status of legislation passed by either the Board of Trustees or by the full faculty of Amherst College?”

7:25 Murphy, “When the board in 1984 banned fraternities, it was something opposed by many alums and most of the student body.”  Hopes students will be available immediately to decide what revisions to the Honor Code are needed.

7:28 A person sitting near me just left, huffing “This is stupid”

7:29 First female student speaks.  Asks why board didn’t make fraternities co-ed and more accepting.  College students would rather find support in a group of peers rather than go to a wellness center.

7:32  Andy read today about how Middlebury has dealt with this issue.  Points out that they do not have a fraternity, but rather co-ed houses.

7:34 Female says that fraternities bridge socioeconomic divide, and racial divide.  She came to Amherst to learn from people who were different than herself.  Says most groups on campus are homogenous.  She cannot imagine anything else that would create that kind of group.

7:41 There are 23 female students in the mostly full room, counting myself.

7:42 Joyce Wamala (’18 E) thanks the trustees for talking with the students.  She wants to clarify what frat life is.  She is a member of a Christian group, and sometimes they split according to gender.  “If we bought a cake and made students crawl on the quad and pick up the pieces to show their devotion to God, would that constitute a fraternity-like institution?”

7:46  Wamala says “I’m sure the board is full of very privileged people who would be for sweeping this issue under the rug.”  Many of the board members themselves were in stereotypical fraternities back in the day.  She followed with asking why the board is now making a decision against the status quo, and asked how this decision would affect less privileged students.

7:51 Wamala asks what the goal was of the fraternity ban–that people might still be a part of a fraternity even though they’re “officially” banned.  Andy says it goes back to the importance of residential life at Amherst.  That maybe it doesn’t have the right building structures and support.  He didn’t seem to answer her question.

7:53 Hands are raised all over the crowd.  Unfortunately, we have five minutes left and not all of them will get a chance to speak.

7:55 Blaine Patrick Werner (’15) Argues there is still much ambiguity–that there can be fraternities that aren’t chartered fraternities (i.e. a cappella or glee club) but still perform fraternity like behavior.

7:57 Andy replies that these groups may have faculty advisor, or receive funding from the AAS so the college can maintain oversight over their activities.

7:59  What elements of fraternities are you looking for to deem those organizations fraternity-like?

8:00  Andy, “You and I, as clever as we are, know what we’re talking about”.  His personal view is that groups such as those that encourage initiation rites and hazing would be considered fraternities.  However, he hasn’t discussed this with the Board.

8:01  Professor Rhonda Cobham Sanders was moved by many of the stories fraternity members share about their experiences.  But, it is important for all students to have the opportunity to benefit from this environment.  It is important for students to have safe, often homogenous spaces.  She says cultural competence is also important though–to move away from those “safe” groups toward greater integration into different groups.

8:04 Savannah West (’15) says that college has a commitment to diversity.  The ban is restricting members from joining outside black fraternities or black sororities.  *Loud clapping*  ResLife told students at the outset that they were allowed to join historically black Greek systems.

8:07 Murphy says they will have to talk to ResLife about this (they were not aware of this particular issue), and they will make sure to clarify what they mean by banning membership in off-campus Greek life.