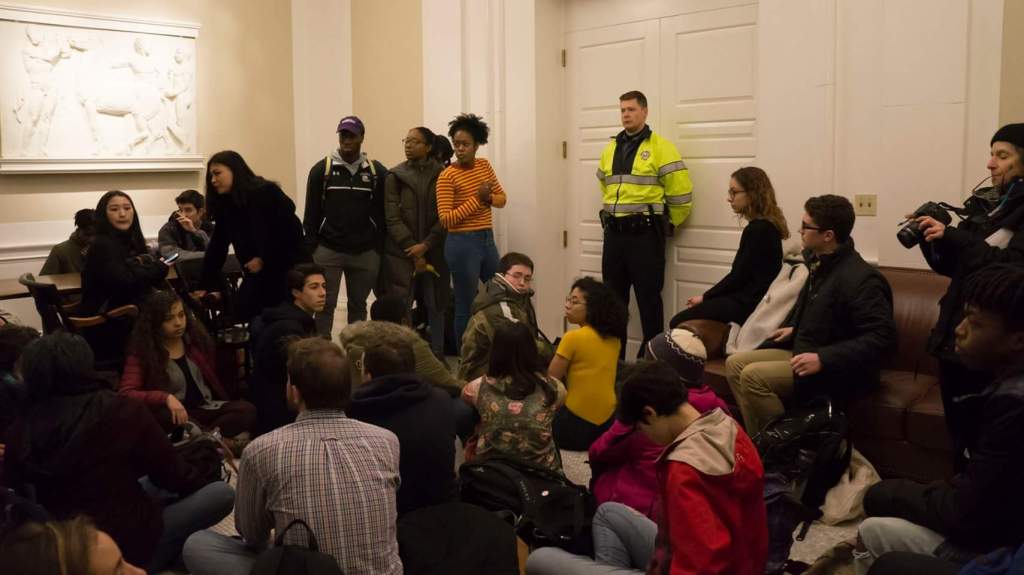 Wednesday’s rally and sit-in against Donald Trump’s travel ban and the Amherst administration’s tepid response to it was met with fierce resistance from administration officials, including the involvement of the ACPD.

Of course, had you read the College’s official news release on the matter, you would never have known. The release whitewashes the entire episode, grotesquely co-opting a student movement to make the College appear “woke” and politically engaged – while successfully ignoring the actual content of the student protest and demands.

As always, the Amherst PR machine never ceased working yesterday as it turned this – like every act of student protest before it – into a picture-perfect PR opportunity. And yet, like all the previous acts of protest, beneath Wednesday’s rally was a wellspring of pain and hurt. This is something that Amherst disregarded at best, and exploited at worst, in its attempt to whitewash and write off legitimate student grievances.

The administration’s news release never engaged in actual falsehoods, but it left out crucial facts of the protest. The first sentence of the release states that the protest served “to express outrage at and solidarity against President Donald Trump’s executive order.” And yet, as the protestors made clear yesterday, Donald Trump was only a secondary focus of their action – the primary focus was the administration and its milquetoast response to the travel ban.

The only mention of the administration’s response to the rally comes in the final paragraph of the release:

President Martin later joined students outside Converse to condemn the executive order—which she said “weakens higher education and society as a whole”—and to emphasize the College’s commitment to doing everything possible to support students, staff and faculty who are affected by the ban.

While this was true, it’s hard to imagine that many students left the rally – and particularly the sit-in – feeling that the administration had just expressed real support for them and was truly on their side. What the news release fails to mention, in a manner that reminds one more of Breitbart than of the intellectual and academic rigor that ought to characterize all of Amherst’s publications, is the fierce opposition to the students and their protest.

Amherst College Police Chief John Carter was present throughout the sit-in and administration officials blocked other students from joining those sitting in. Officials present issued what one student termed “vague threats” to those already present, which seemed to imply either the forcible removal of the students by the College Police or disciplinary action if they continued to refuse to leave – at one point, the Code of Conduct was cited.

Furthermore, Biddy herself expressed vocal opposition to the students sitting in her office. She said students were terrorizing her staff – despite the fact that they were of course unarmed and merely sitting on her office floor. As students were leaving (after a member of the staff revealed that she had recently had heart surgery and was currently under great stress due to the sit-in), they informed the President that they would escalate if their demands were not responded to in a timely manner. Biddy then responded, “Don’t threaten me, young man.”

Indeed, the administration’s refusal to engage student protestors on their ground is not unusual – it is in fact par for the course. The administration usually excels at co-opting and appeasing student protest by attempting to express support on its own terms, and thus stripping power and momentum from nascent student movements. This occurs through engaging in exhausting but ultimately fruitless long-term negotiations, patronizing students, and working to prevent the formation of strong coalitions. In my time at Amherst, half a dozen student movements have started and failed due to student busyness and, most crucially, administrative appeasement tactics.

Biddy re-emphasized this in an email on Thursday, writing at the start that “I will not respond to yesterday’s list of demands from the protesters on its terms.” This is also reminiscent of Amherst Uprising, when students were cautioned to frame demands as “appeals,” and when Biddy’s Sunday speech was met with widespread approval – despite the fact that she had just rejected all of the movement’s demands.

Much of this is due to our understandable desire to see the administration as our friend, and to work with it on that basis to make Amherst a better place. But, as we have seen time and time again, that is a losing strategy for students – it only works to slow and ultimately destroy once-powerful student movements.

While students must of course work with the administration to affect change, we ought to do it on our terms, as student protestors. Student activists must not be manipulated, and must remember what they are fighting for. Students protesting against apartheid, against the Vietnam War, and against a hundred other injustices in the past century did not treat the administration as their friend, but merely as the authority with which they had to work. We would be making a crucial mistake if we did not do the same.

Amherst College, and the administration that enables it to function, exists to empower and educate us, not to be our friend, and certainly not to haggle us down when the rights, safety, and lives of our fellow students are at risk.