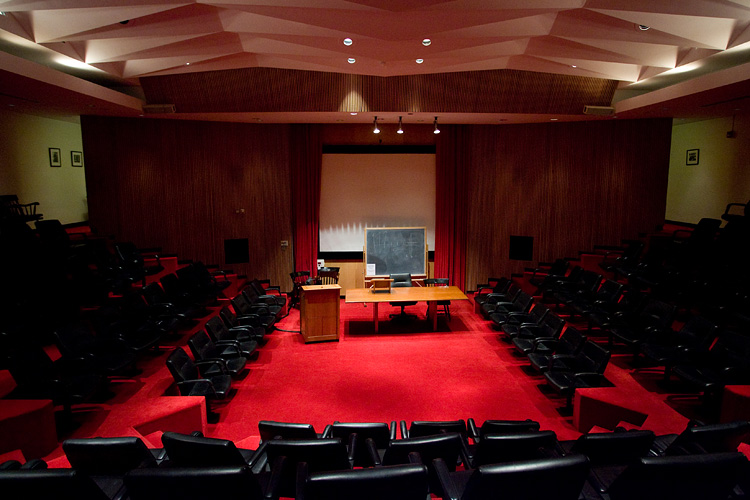 (Matt DeButts)– The Amherst College faculty is ornery. Curmudgeonly, if you will. I suppose it comes as no surprise that if 200 professors come together in a room, they’ll rarely agree on anything. Voting blocs emerge—the Austin Sarat caucus for I-like-things-the-way-they-were, for example. The meetings can linger on as tenured professors must have their say. The President of the College, whoever he or she may be, is automatically assumed to have dubious intentions. A provost? A strategic plan? That sounds like an administrative power grab to me! And while you’re at it, the faculty might say, get off our goddamn lawn.

So it goes if you have ears to hear it. A newcomer to faculty meetings hears little but what is actually said; that is, very little at all. “I defer to our esteemed colleague in the Art department,” or “While I’m sure you know more about this than I do…” etc. and so on. But between the lines of deference and camaraderie, wars are waged with constantly shifting battle lines. The performing arts team up with the lab sciences to campaign against the shortening of interterm. The foreign languages form a bloc in support of the double major. Each issue is a skirmish in a wider war. There are generals, lieutenants, and foot soldiers. Untenured professors are the foot soldiers in the faculty wars. For untenured professors, every issue is a mine and each superior has the potential to summarily execute (tenure denial, that is). To speak in a faculty meeting as an untenured professor is to risk much for little reward. Speaking in faculty meetings isn’t worth the potential antagonisms. Better not to risk it.

As a result, faculty meetings tend to follow a similar trajectory. Biddy speaks amiably, as if everyone is BFFs. The professors eye her suspiciously. Dean Call floats around in a cloud of benevolent detachment. The usual professorial cavalcade trots out: Ronald Rosbottom speaks off the cuff and makes 50% sense; Lyle McGeoch says something in a fit of complete and utter earnestness; Frank Couvares channels the faculty’s collective will; leonine Austin Sarat waits until the last minute before making a muck of things just because he can, and so on and so forth. This performance continues until such time as Stanley Rabinowitz reminds everyone we are over time and asks to adjourn. It’s a fascinating piece of political theater, but it rarely surprises.

At last meeting, however, your correspondent was indeed very much surprised. In the midst of the performance, a new, youthful voice spoke up from stage left. I don’t know who this white knight is, but her voice carried loud and clear. She prefaced her comment by saying, “As a young professor, I. . .” and launched into a defense of online learning. One—what untenured professor dares to speak up at a faculty meeting? Two—what untenured professor dares to speak up in favor of online courses at a faculty meeting? Listening to her speak was like watching someone eat the decorative fruit at the center of a dining room table: “yes, its edible but you’re not suppose to eat it.” I felt embarrassed and slightly nervous on her behalf. When the skies rain fire on online courses—which they will at some point, I promise you—I wouldn’t want to be that brave untenured woman.

Although I exaggerate a little, my general point stands: speaking at a faculty meeting is dangerous. It should not be. Amherst College has begun its greatest demographic shift in recent memory, with many of its professors moving into phased retirement. We’re hiring in droves—41 new visiting and tenure-track professors in 2012 alone—yet these new professors are effectively disenfranchised. Their voices are silenced. Their votes, although “free”, are constrained by the potential tenure risks they might incur. The college’s important committees (CEP, CPR, Co6) are tenured professors only. The strategic planning process (the formation of a 20-year plan for Amherst College) will be similarly limited. As the College moves forward into its third century, it is increasingly led by those professors who will not be around to see it.

This is bad for the College, the students, and the professors themselves. Professors grumble that they are overworked; placing untenured professors on important committees would lessen the administrative burden. Junior professors arrive from varied institutions with outside perspectives that could benefit the insular culture here at Amherst. However, the most significant issue is the timing of professors’ tenures here. The future of the College belongs to junior professors even as the present belongs to the seniors. In moving forward, Amherst’s faculty should make a greater effort to encourage their junior colleagues’ participation in discussions and in committees. It could do so both through structural alterations—place junior professors on strategic planning committees—and informal solicitation of untenured opinions. The junior professors at this school are the future of our institution. Perhaps the Faculty ought to treat them accordingly.