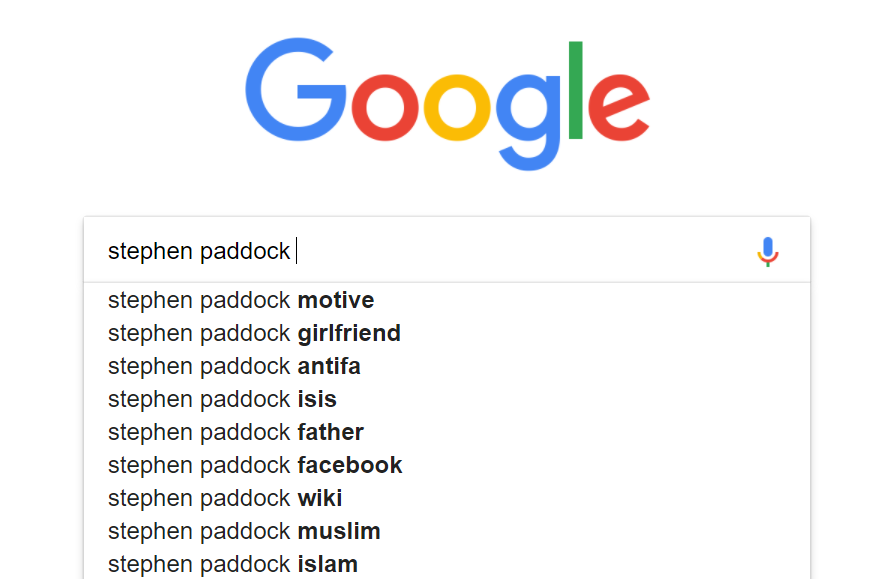 Whenever a tragedy of the proportions of Monday’s terrible incident in Las Vegas occurs, it swiftly becomes framed in broader narratives that accord with the interests of the framers. An event as disruptive as a mass shooting will clearly trigger multiple political responses: two of the most salient are fears of terrorism (with the attendant fears of immigrants, foreigners, and Muslims) and renewed interest in gun control, whether for or against. A look at Google searches in the hours after the attacks gives an honest snapshot of the public’s gut reactions to the attacks.

It bears mentioning that the four terror attacks in 2017 that resulted in 100+ casualties were located in Syria, Libya, and Afghanistan, but that doesn’t destabilize the muslim-vs-nonmuslim dichotomy that is entrenched in mainstream Western discourse. A corollary is that violence directed at the public is almost invariably associated with Islam, and that fears of Muslims, Islam, and terrorism are linked to xenophobia and anti-immigration sentiment. To examine this hypothesis partly, I used Google Trends to compare the level of searches for terms relating to these themes: “Islam,” “Muslim”, and “Immigration” as they contrasted with “Las Vegas Terror” and “Gun Control”. My hypothesis is that there will be a spike in searches of Muslim and Islam in the immediate aftermath of the tragedy due to a number of factors:

Please look here to get the necessary tools to interpret these data for yourself . You may obviously also look at google trends directly to see the charts. Here, I’ve tried to make them cleaner and make the trends more discernable, and have added lines to mark important events as the tragedy unfurled.

Note: The Time is in GMT (7 hours ahead of Pacific Time) and the data are limited to searches in the United States. Moreover, this is still early in the week, and reactions to the event will certainly change as new developments unfold. That said, for the purposes of seeing how interest in Islam and Muslims jumps up in the aftermath of this tragedy, we can make certain limited inferences.

To see an interactive version of the above chart, click here. *To see how ‘Search Interest’ is defined, look here.

A couple of trends jump out immediately:

Additionally, the vigor with which a lot of people seem to want to cast this as an act of Islamic violence is alarming but unsurprising in the political climate of the Status Quo.

On another level, it appears that people have been actively engaging with what distinguishes a ‘terrorist’ from a ‘shooter’ and/or a ‘lone wolf’, as a lot of people seem to be googling the definition of a terrorist. This terrible tragedy has triggered a debate in portions of the mainstream media about who gets classified as a terrorist and what crime gets deemed as terrorism. But the data also show how, in the minds of ordinary people, the conventional, allegedly biased split between terrorist and lone-wolf/shooter is more tenuous than we initially assumed.

Please email amherstcollegevoice@gmail.com for more information about methodology and/or if you want an interactive graph. We will be posting updates to this issue.