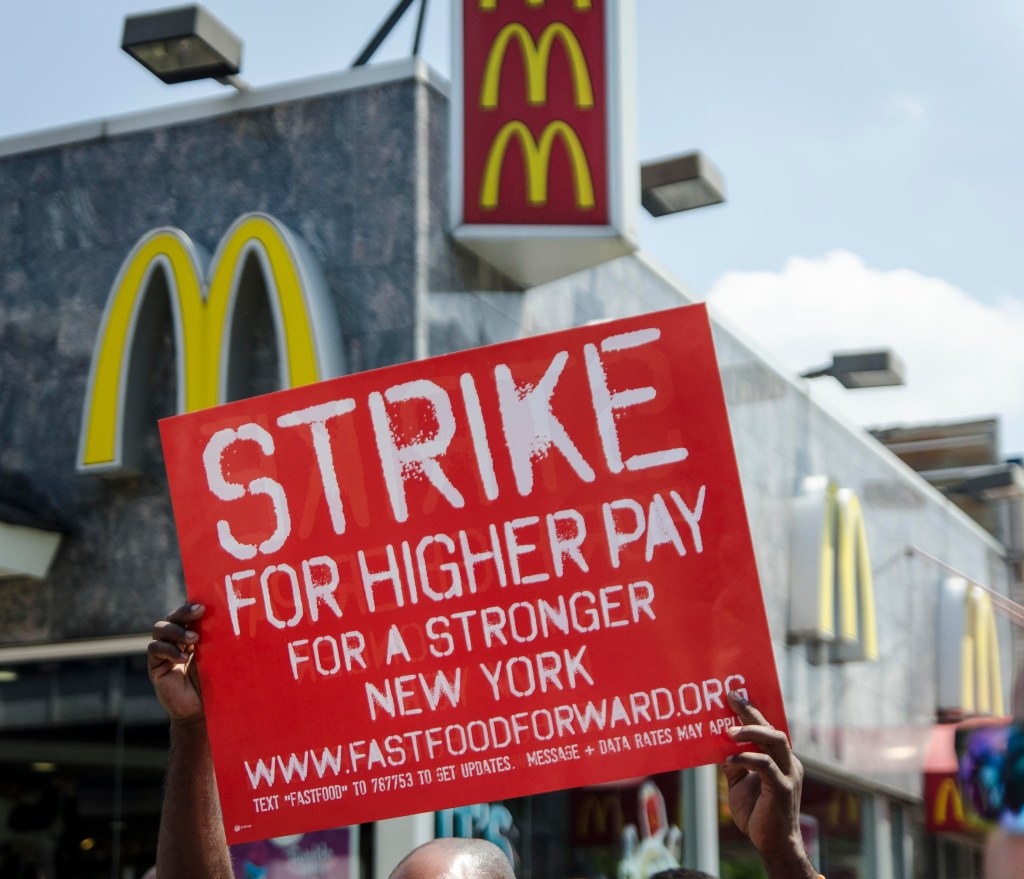 Carrie Aldrich is a single mother who has to work multiple jobs – sometimes as many as five – to support her children. These jobs always pay minimum wage, and never provide enough. She tearfully shared her experiences at a recent rally for Democratic Presidential candidate Bernie Sanders, who had asked audience members what it was like to live on $12,000 or $10,000 a year.

“You’re ashamed all the time,” Aldrich explained. “When you can’t buy presents for your children, it’s really, really, really hard.”

Aldrich is in the same position that many of us will be – equipped with a college degree and seeking just enough work to sustain ourselves and our loved ones – in just a few years. She represents the growing need for an increase in the federal minimum wage of $7.25 an hour, which some 3.3 million Americans currently subsist on or below.

The strongest movement for a wage increase is the Fight for 15, which advocates a $15 an hour minimum wage and wants workers to have the right to form a union without retaliation. “Low-wage jobs are the fastest growing jobs in the nation, and they need to pay more so that workers like us can make ends meet, and rebuild the middle class and get the economy working again,” the movement explains on its website.

This logic is not wrong. Numerous studies have theorized that if middle- and working-class employees have more money to spend in their local economies, then those communities will flourish. These theories were put to the test in Seattle last year, when the minimum wage began a steady increase towards $15. A report in October showed that the city’s restaurant industry, which had been vocally opposed to the hike, is booming. A number of restauranteurs who had been certain they’d have to close up shop are engaged in plans to open new eateries.

Seattle represents a rebuff to the many conservatives (and some liberals) who argue that raising the minimum wage will doom industries – or lead to the replacement of the American worker by the automated one. They also say that those who supposedly need the wage hike – like Carrie Aldrich – should just work harder, and are mostly teenagers anyways. However, the average minimum wage worker is 35 years old and employed full time, and is often struggling to support a family on a paltry $7.25 an hour.

Of course, local economies differ hugely, and some cities may not be as well equipped to absorb a minimum wage increase as Seattle. It is possible that businesses would close and employees would be laid off in the event of a nationwide minimum wage hike, but that misses the point. While economic benefits are important, they aren’t why advocates want to raise the minimum wage.

The foundational assertion of the Fight for 15 and similar movements is that it is appalling that Americans can work full time and still not be able to support themselves or their families. It is a moral outrage that Carrie Aldrich and millions more like her struggle in anonymity and silence in one of the world’s most developed countries.

Raising the minimum wage may help the economy or it may hurt it, but it would be a moral victory regardless. There is historical precedent for this sort of decision. In the earlier twentieth century, for example, reformers worked tirelessly to ban child labor, because they found it unconscionable that kids as young as five were risking their lives in dangerous factory environments for paltry sums. When child labor was abolished, industry took a hit, but that wasn’t what mattered. Likewise, modern-day reformers are demanding an America where workers are paid a wage they can live on – a concept that shouldn’t be as contentious as it is.

This isn’t some policy discussion that has no impact on our lives as students. The college forum on student workload last semester displayed that we are juggling schoolwork, extracurricular commitments, athletics and the maddening search for summer jobs and internships. Somewhere in all of that, many students have to work multiple jobs in order to be able to attend Amherst at all. A hike from the current Massachusetts wage of $10 would relieve some of that pressure on students. And after graduation, when we’re in Carrie Aldrich’s shoes, struggling to find adequate work despite our valuable degrees, a $15 minimum wage will make that struggle just a bit easier.