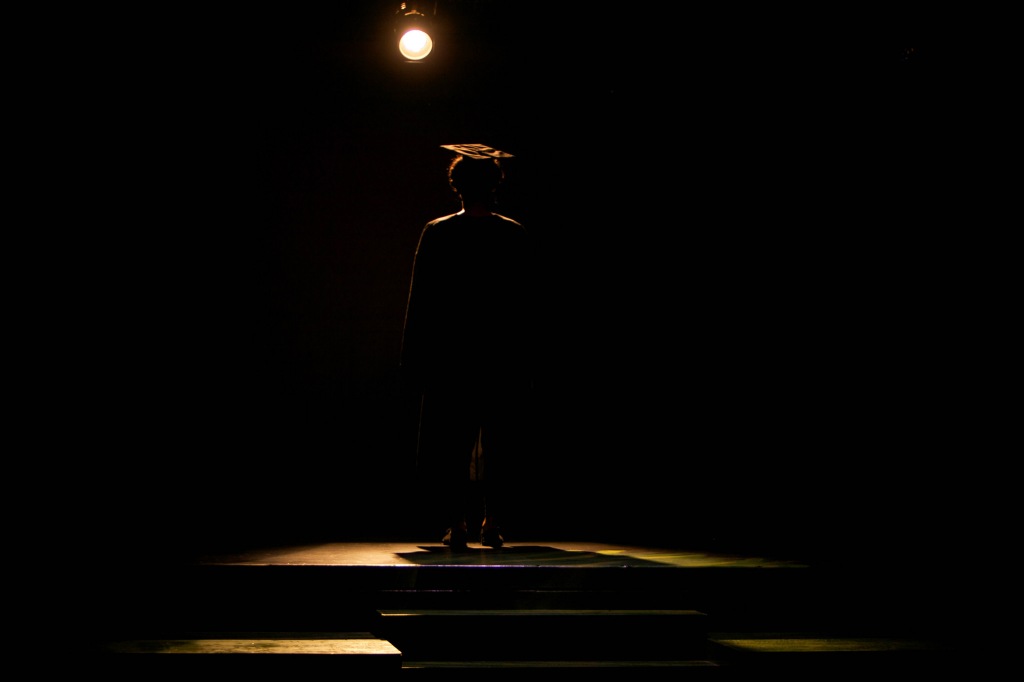 Amid the blur of fliers and posters during Orientation, the one that caught my eye most was a flier publicizing an audition for a production of Shakespeare’s Cymbeline. Performing in a Shakespeare play was one of the top items on my college bucket list, so I decided to audition. As a first year, I had no idea if I had any chance of actually getting in, but I decided to go for it. The audition was filled mostly with upperclassmen who knew the ropes of Amherst, while I was still getting over my jetlag from the trip to Massachusetts. But I got in, along with three other first years. Soon, that cast became something close to a family, as casts usually do.

Every interaction I’ve had with members of the theater department since has been positive, whether it was with students, faculty, staff, or anyone else. There are so many talented, hard-working individuals that put an enormous amount of time and energy to make the department what it is, in ways that go so far beyond academics. The senior thesis projects are a testament to that. For anyone who has been to any of the three theses produced this semester—Pepper Dee’s “The Other Side”, Valerie Rodriguez’s “Grow Up Already!”, and Daejione Jones’ “Destiny”—this is easily apparent. Each production addressed the college experience, and the Amherst experience in particular, in unique ways that could not be expressed through articles or essays. In many ways, the art produced by our community at Amherst is a reflection of the place itself. Each performance was powerful and produced with talent and passion. The rest of us are lucky to have access to such wonderful performances produced by our peers and the faculty and staff that work to help bring each show into being. And by going to see these performances, we can all be part of that community. There would be no theater without an audience.

Despite only having been in two shows so far, and not planning on majoring in theater, I feel like I am a part of that community. At every school I’ve attended, the theater or auditorium has always been a very special place to me. I’m glad I can say that such is the case here, as well. I’ve already fallen in love with Holden, both as an actor and an audience member, as I’m sure many others already have and more will to come. In this way, the theater can be something that connects us to past and future generations of Amherst students, faculty, and staff, a space shared throughout generations.

So, for anyone who’s ever considered auditioning for a show at Amherst: do it. And even if it doesn’t work out the first time, audition again. Or, ask about backstage opportunities. Every production needs costume designers, stage managers, set designers, and a host of other positions just as much as actors. I’ve felt so lucky to work with so many talented people and to be a part of such a fantastic community. For those that add to this community through their presence in the audience, be sure to keep your eyes peeled for all the performances to come! Bryce Monroe’s “The Lower Frequencies” will be playing from April 2nd to 4th and the faculty-produced Novetto will be playing from April 23rd to 25th. Also be sure to follow the Theater and Dance department Facebook page to keep tabs on the myriad smaller student performances that happen throughout the year. All performances are free, making shows at Amherst easily accessible to the entire community. I know that getting to shows, much less auditioning for them, can be difficult, what with the craziness of all our lives at Amherst, but if you plan ahead and manage to carve out some time, I don’t think you’ll be disappointed. I know that I’ve learned a lot about myself, both in and outside of the context of Amherst by going to my peer’s performances, and come to a greater understanding of both the flaws and the triumphs of this place we all call home. That’s what art does at its best: it teaches us more about our surroundings and ourselves.