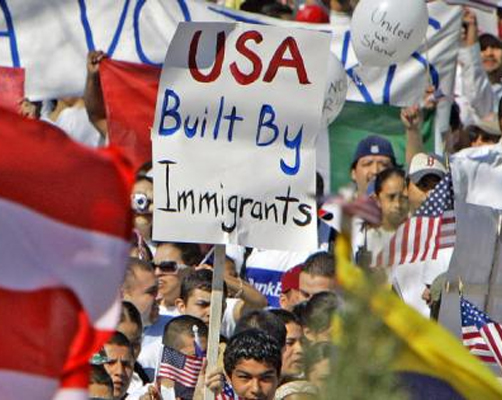 We all know that immigration is a hotly debated issue in the United States. We have listened to President Obama speak on television about comprehensive immigration reform alongside other issues like health care, education, and foreign policy. We know that this country was built on the backs and by the calloused hands of immigrant workers. And we also know about the abuses that these people endured as a result of being regarded as cheap and exploitable labor.

There’s the quarantine that occurred along the U.S.-Mexico border from 1917-1940, when Mexican migrants were bathed in kerosene and deloused before entering the U.S because of this country’s racist sentiments about Mexicans as unclean. It was a form of “eugenic gatekeeping” that ensured the purity of the “American” family-nation while perpetuating stereotypes of Mexicans as filthy and hypersexual individuals. The Bracero Program (1942-1964) was a large-scale government recruitment of Mexican migrants who toiled the lands along the U.S.-Mexico border and were not allowed to form unions. They were paid shitty wages and directed like animals as they worked in the fields in the Southwest and helped America’s agricultural economy grow. There was also Operation Wetback (1954), the government deportation of one million Mexicans in just a single year as a result of combating the problem of illegal border crossings. And yes, “wetback” was a term coined by the U.S. government.

I could go on listing American policies and programs that have criminalized Mexican immigrants, and more broadly, bodies of color, but to do so would only prove what we already know about the deep structural inequalities in place in this country. Immigrants are a vulnerable population and represent what it means to be “invisible” in a country fixated on “visible” patriotic citizenship. Recently, I read a scholarly article by Elena R. Gutierrez on the privatization of the Mexican woman immigrant’s body and how her perceived hyper-fertility became grounds on which to judge her as a social problem during the 1980s and 90s in the U.S. These women quickly became a “public health issue” that American citizens were told to fear and look out for.

During the 1960s and 70s, Puerto-Rican women were also regarded as a social problem when they were sterilized, without knowing the permanence of the procedure, by doctors instructed by policymakers to address the issue of overpopulation. Although they were not considered immigrants like Mexicans, they were still branded as the “other” relative to white Americans. According to the U.S., Puerto Rico was “overly- populated” and so representatives from “family planning programs” quickly pervaded every corner of Puerto Rico. It was an attack on the reproductive system, an invasion of women’s bodies linked to imperialism and creating the perfect nuclear family. Quite frankly, agency has not been part of the existence of bodies of color in America. Broken promises made by the land of opportunity comfortably and consistently occupy seats in their transnational lives.

The story of the Mexican immigrant hangs between being a matter of national borders and a matter of personhood. These bodies, as they cross cultural, political and social borders, have simultaneously been made visible and silenced through the racialization of different laws and deportation. In the words of many migrant activists and ethnic studies professors interested in Mexican- American relations, “we didn’t cross the border, the border crossed us”.

Furthermore, migrants are seen as a threat to the national political agenda when they attempt to build solidarity among themselves through organizing around local and national policy issues. What we observe here is a cycle of repression and resistance that is in tandem with the U.S.-created cycle of debt and deportation in the journeys that Mexican and Central American migrants make between their home countries and the U.S.

As long as the U.S continues to push working-class immigrants into the lowest sectors of society and deny them opportunities to secure higher-paying jobs, be approved for a mortgage, obtain a private education, buy healthy food, and apply for health insurance, there will always be inequalities in this country. Legislators simply attack the most vulnerable immigrant populations when they feel a “social problem” brewing, turning it into a matter of general public interest. The fear of over-population during the 80s and the 90s became yet another reason to demarcate Mexican immigrant women as irresponsible blood-suckers of the country’s American, tax-paying citizens.

Power will always do the naming and never name itself. To say that access to education or reproductive care should be debated within American courts is beyond me simply because I believe we all have rights, regardless of citizenship, as human beings. Xenophobia, the fear of foreigners, and racist legislation will continue to affect the most marginalized communities in this country as long as these groups are prevented from organizing effectively under a political voice that demands immediate social change.

This semester, I read about the exclusion policies I discussed earlier, tried to understand the production of illegality and how prison and education systems are modern-day spaces of racial segregation. This educational experience has opened my eyes to the realities of the 11 million undocumented immigrants in the country, as well as my very own realities as a U.S. citizen. But will the voices of the immigrants I learned about in the videos I watched for class and the inmates I formed relationships with at the Franklin County Jail follow me back home and into the next academic year? Will I join a public advocacy group in Springfield like “Just Communities” and join the fight against anti-immigrant legislation on national and local levels?

To only be aware of the policing of bodies of color and the structural inequalities that perpetuate it is not enough though. I still can’t believe how much I’ve taken my American citizenship for granted. I propose that undocumented students at Amherst and in colleges across the United States should feel empowered to share their stories with the greater community. The youth immigrant movement that originated in California has made considerable gains, for these students, most of which are still depending on the DREAM Act to pass, are no longer living in the shadows and are advocating for changes in immigration policy. I have taken courses with undocumented students at Mount Holyoke who were not afraid to publicly declare their citizenship status.

But where are the undocumented students at Amherst and do they feel included in this community? I have friends who are undocumented, but they are ashamed to share their stories. Perhaps Amherst needs an association and more support for immigrant students to advocate for change within this community and feel proud of who they are. I am, however, not suggesting that undocumented students speak up about their experiences when deportation is a real fear. But as the immigrant youth movement in California showed us, there is power in numbers.

I am also not undocumented nor grew up in a mixed-status family, but this does not mean that I do not stand in solidarity with those oppressed by immigration policies and racist laws. Whether it is by forming an official association for immigrant students (undocumented and documented), advertising more events on immigration reform in the Pioneer Valley, hiring more professors who teach courses on immigration or having more spaces on campus to speak about this misrepresented population, we need to stop thinking that immigrants are criminals or “alien” to America. Contrary to popular belief, immigrants are also not only Latino/a or Latin American, for they come from many different parts of the world.

It does not matter whether or not you come from a low-income neighborhood or belong to a mixed-status family; we are all equally responsible for creating a more inclusive America, from our involvement in our communities, the causes we stand up for and the different ways in which we express our beliefs in our everyday lives. Undocumented immigrants should have the opportunity, without being degraded, to obtain a status of legal citizenship and live as visible members of this country.