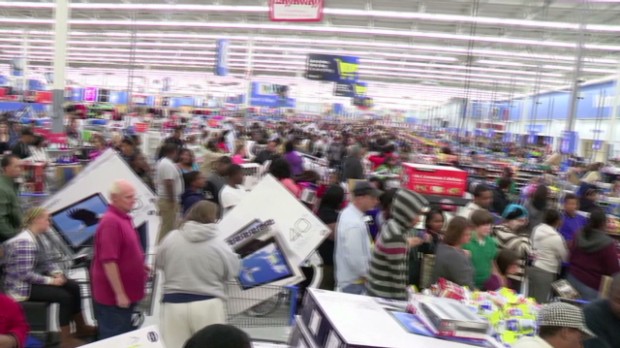 Giving is better than receiving! Inside, we’ll show you how! – Manhattan Gap ad

The green letters of “giving” in the advertisement are capitalized and bolded, as though Gap wants to dispel any guilt that might accompany our presence in their store and out on the streets on this Black Friday afternoon. They assure us that we are justified in our consumption. You are not like those selfish people so desperate to buy that they literally trample employees to death to get what they want. You would never do that. You’re not even out here for yourself, are you? No, of course not.

You’re here for your best friend, your sister, your boyfriend, or your kids. Because of the multiplicity of the holidays in these last two months of the year and the lingering air of the recession that made it fashionable to be cheap, consumers are even more shameless in our pursuit of seasonal deals. As the shopping horror stories get more dystopian year after year, we try to counteract the distasteful image of raw consumerism by overlaying it with the thin coat of generosity.

Done tactfully, this can make for a fairly brilliant advertising campaign. While the Gap ad I saw only bothered with the bare minimum of altruistic pretense, UK department store John Lewis really captures what we call “the holiday spirit.”

Their highly popular 2011 commercial is more like a short film than a corporate advertisement. No specific products are emphasized—it’s all about the story of the boy, with just a simple tagline and the brand name (as well as a reminder of the three ways you can buy their products) at the end. These are the advertisements we love to see at this time of year: they are sweet, memorable, and draw the emphasis away from the rampant consumerism that characterizes the season. There’s a reason the John Lewis video is one of the most popular holiday ads, both with consumers and those in the business. Jeff Gabel, Chief Creative Officer of advertising agency Partners + Napier specifically praises it: “The entire time the spot is leading you to think his impatience is due to the more consumptive motivation of the holidays: gift receiving. But in the end, it’s all about gift giving.”

“In the end, it’s all about gift giving.”

It’s a nice thought, and there is certainly evidence to back up the benefits of giving to others. But there is something unsettling in the imperative and excessive tone this maxim takes on as we approach the holiday season: a subversive, self-centered, and ultimately futile desire that lies beneath the drive to give.

What does it mean to give a gift? In the abstract it is an expression of appreciation, generosity, gratitude, which we attempt to represent tangibly through goods—preferably goods that the receiver desires. There are, of course, selfish benefits that come from this sort of exchange. One might give for inherently economic reasons: in the hopes of reciprocation or some kind of increase in the esteem of the receiver. This selfishness is subtle and easy to indulge when the purchase of goods as “gifts” is so easy and so encouraged by the seasonal façade of generosity. This past Cyber Monday the universally low prices online tempted me to buy gifts for people I otherwise wouldn’t have—the only real factor in my change of heart being the fact that everything was on sale. Was I really thinking about these other people, or just myself? It’s hard to know for sure.

A gift is an attempt to fulfill someone’s desire, to be the thing or the source of the thing that fills some hole in them. Every year, my mom tells me not to get her anything for Christmas. This is not like when you tell someone not to do something when you really want them to do it—she actually means it, completely unselfishly. But the fact that my birthday and Christmas fall so close to each other coupled with a general sense of appreciation for all she’s done for me my whole life makes it impossible for me to let the season pass without getting something for her. Every year, it is a struggle to find gifts that can actually express my love and gratitude. There are no objects that I could give her that could ever come close to what she really wants, which is simply more time with me.

This is the one gift I wish I could give that I simply cannot—it is impossible given the physical distance between Massachusetts and Iowa, not to mention the cost of frequently traveling between the two. We both know this, and I know that she does not hold it against me. Yet year after year, I try and fail to fill my physical absence with small, ultimately meaningless gifts, which really do more to assuage my personal guilt than anything else.

French psychoanalyst Jacques Lacan taught that all our desire is actually the desire of another; the desire to fill this “lack” that we perceive in others through tangible or even intangible signifiers. Ultimately, however, there is a lack that can be filled by neither tangible goods—jewelry, cars, technology—nor abstract concepts—power, knowledge, popularity. No matter how sincere our generosity in giving to another, this is a wanting that cannot be overcome.

This is not to say that giving is wholly pointless or self-serving. This year I’m participating in several Secret Santa exchanges, which can be a great way to get to know people and think meaningfully about them. You are forced learn a lot about a person when you have to give them a gift. But at the same time, it’s worthwhile to be aware of our motives for giving as well as recognize and accept what we cannot give. The gift of one’s love is not a gift if it is in the imperative.