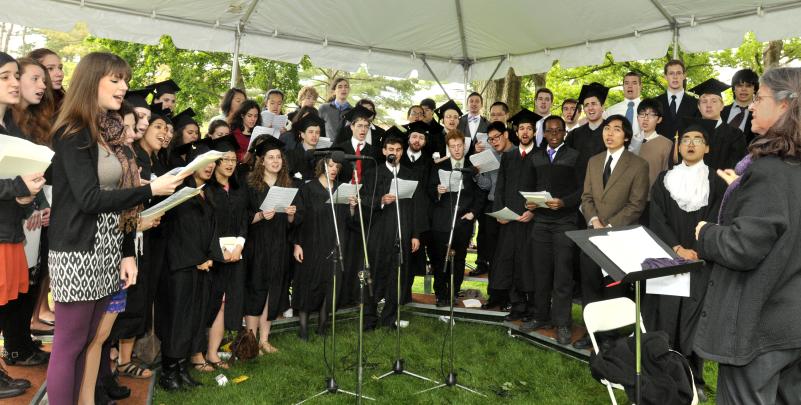 Despite the very real problems Amherst faces today, I think it’s clear we’re a lot better off than we were a hundred years ago. A lot has changed since then: the college admitted women in 1975, on-campus fraternities were banned in 1984, and under the term of President Tony Marx, diversity became a corner stone of the Amherst college experience. Successful or not, there have been great administrative and student efforts to take the all white “boys’ club” out of Amherst life. It’s difficult then, to reckon ourselves with any sort of old school tradition at Amherst. It’s hard to be proud of our genocidal mascot, it’s hard to love the history of destroying and capturing our Sabrina, it’s hard to sing the college songs.

I’m the president of Women’s Chorus, the all-female group within Choral Society that was founded in 1979, the same year the Sabrinas were founded. When Amherst became coeducational there were only two groups considered “choral society”—aka directed by a paid conductor and not a cappella: Glee Club and the Freshman Glee Club. From all accounts, the Glee Club was basically another frat. The music mattered much less than the wild parties they threw. When our current conductor Mallorie Chernin took over, there was an outrage among many (though not all) alumni and current students. A woman conducting their precious men’s chorus? Quelle horreur. But when the college pushed for the abolition of Glee Club as women were admitted to the college, Chernin pushed back and instead helped form the Concert Choir (a mixed choir, already there when Chernin took her place) and Women’s Chorus and at the same time fostered a very real change within Glee Club itself. Glee Club now is very far from a fraternity culture and regularly has events (both performances and informal parties) with other Choral Society groups.

This is the kind of transformation I think all Amherst traditions should go through. I don’t think everything from the “glory days” of racism and misogyny should be stripped away without explanation. A prime example of this would be the fraternities. I don’t personally agree with the idea of fraternities in general, but it’s hard to say for sure about Amherst frats when I don’t really know what went down with Psi Upsilon. President Marx only wrote a very vague condemnation in an all school email that it was due to a “serious violation involving the leadership and members of the off-campus fraternity Psi Upsilon.” I’ve certainly heard the rumors, but if it is true that hazing involved non-consensual taping of other couples having sex, isn’t that something we should have talked about in 2010? If we’d taken that opportunity to discuss consent (or general hazing or whatever serious violation Psi Upsilon members committed) wouldn’t that have made us a stronger campus?

So every year I sing the college songs. And I love them. I really do. They’re silly little songs and every homecoming concert we welcome Choral Society alums of all ages to the stage who frequently tear up singing “Lord Jeffrey Amherst.” They would be an Amherst tradition that “works” for me, except for the several lines that make me cringe, and cringe a lot. Most of the college songs were written for contests called “Interclass Sings,” that challenged groups to both perform and compose the best college songs beginning in 1903. These contests were what really made Amherst College “the singing college.” Over half of the student body participated, and they were incredibly popular in the community. It’s these competitions that spawned our most popular college songs today. Therefore, these hundred year old songs have very little to do with our current campus culture.

By far the worst offender is “Lord Jeffrey Amherst.” “Lord Jeff,” as it’s affectionately known, is not our alma mater, but considering it’s popularity it might as well be. This is mostly due to the wide range of the harmony in the chorus (trying to sing this a little tipsy at a choral society party is no joke if you’re a soprano) and the movements and gestures to go along with the song that have been with us for decades. If you’ve heard the song you should already know the problematic line just as every time we teach freshman there’s always a slight murmuring as it’s learned: “To the Frenchman and the Indians he didn’t do a thing.”

The real historical figure Jeffery Amherst was the British commander in chief in North America during Pontiac’s Rebellion in 1763, in which tribes from the Great Lakes, Illinois Country, and Ohio Country rebelled against British policies toward the end of the French and Indian War. In fact, it was because of his policies that the Native American tribes rebelled in the first place. In a letter in July of that year, Colonel Bouquet writes to Amherst, suggesting that the smallpox that has broken out at Fort Pitt be used as a biological weapon against the Native Americans. Amherst approves and further urges him “to try Every other method that can serve to Extirpate this Execrable Race.”

Whether you think Lord Jeff should continue to be our mascot, whether you are bothered listening to the college song, we must all acknowledge that Lord Jeff did indeed do a “thing” to the Indians. He was a racist, he committed genocide, and in a college song we have glorified him. That’s not something any of us should be comfortable with. The composer of the song undoubtedly knew Amherst had committed these crimes. He wrote the line undoubtedly as a joke, but genocide isn’t one.

The song should not only hurt Native American students, it should hurt all of us. But Lord Jeff is a part of our history as a college and not something we can or should try to push out of thought, out of mind. In a recent Facebook thread among choral society singers and alums a compromise was reached. Not singing the song altogether would certainly remove the implication we accept this lyric as a “joke” but it would also remove us from any responsibility. We cannot rewrite the history of oppression at Amherst, but by becoming more aware of it we will hopefully have more respect for the people the song marginalizes.

Certainly, this is a stopgap. The Glee Club 150th Celebration is in 2015 and will feature a beautiful collection of the college songs. Hopefully this will re-ignite interest in our history as the “singing college” and encourage new additions to our musical history, including new college songs themselves. It’s not easy to create new traditions, but it’s crucial if we want to fully bring our college into our modern world.

Many thanks to Nancy Yun Tang, Walker Boyle, and Mallorie Chernin for inspiring and helping with this article. A very much-abridged version of this post will appear in the program for the Choral Society Homecoming 2013 Concert.