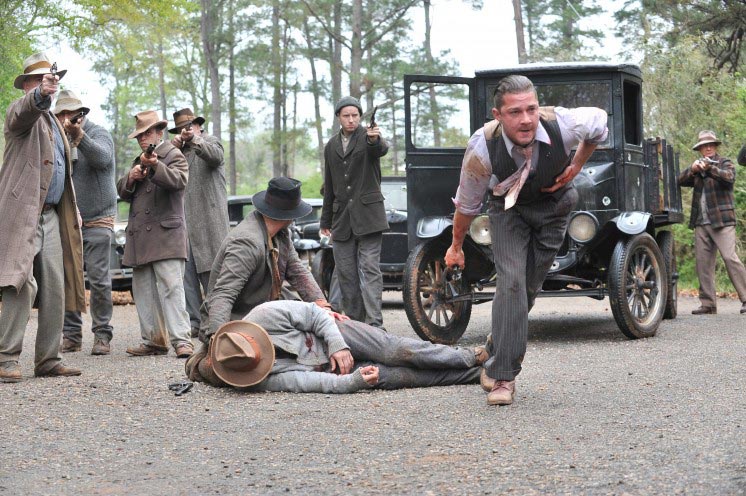 (Ethan Gates)– When violence erupts, whether at an American embassy in the Middle East or a movie theater in Colorado or a Sikh temple in Wisconsin, we have a compulsive need to distance ourselves from it. In our ideal world, brutality exists on the margins of society, pushed into the corners of the earth by civilization with a capital C. We blame other people’s religion. We blame their mental illness. We blame their physical and emotional isolation. In our homes we are safe and sound and undisturbed – so it is only on the edge of this comfort zone that violence can thrive.

And thrive in such places it certainly does. In cinematic terms, the Western genre has been exploring this ground for decades: films like “The Wild Bunch” and the modern classic “The Proposition” confront the staggeringly bloody cost of progress and refinement on the frontier. Now, the creative team behind “The Proposition” (director John Hillcoat, also of “The Road,” and musician/writer Nick Cave) have re-teamed on “Lawless,” another brutal rumination on violence that plays with tropes of the Western while meaningfully shifting the action to a less familiar setting in Prohibition-era rural Virginia. This is not the frontier – this is Appalachia, smack dab in the middle of our”civilized” nation. When violence explodes, it is not a marginal affair, but something that festers in the heart of America.

You could maybe blame the Bondurant brothers, the film’s sibling protagonists, for the savagery on display here. Youngest brother Jack (Shia LaBeouf) suggests as much in his opening narration when he notes that violence always seemed to follow him and his brothers, the gruff leader Forrest (Tom Hardy) and quick-tempered Howard (Jason Clarke). But then how do you explain the behavior of crazed, dandified lawman Charlie Rakes (Guy Pearce)? Or Chicago mob boss Floyd Banner (Gary Oldman)? Or the fact that just about everyone in Franklin County seems willing to slit someone else’s throat for enough money? “Lawless” accepts violence as a latent part of the human conidition. Sometimes it just needs to be woken up.

As the film starts, Jack’s ferocious side is still sound asleep (along with half the audience, after LaBeouf’s overbearing and pointless voice-over). He’s clearly the runt of the family, desperately trying to weasel his way into the moonshine business but dismissed by his burly older brothers (with specimens like Hardy and Clarke in the family, Jack has clearly drawn the short stick in the gene pool). Jack does have the business savvy to start dealing directly with Banner and his city-dwelling crew, raking in enormous profits beyond what his little backwater hometown has to offer. But Jack choses to flaunt his cash with expensive clothes and cars, a supremely gentrified display of power considering that up to this point Forrest’s brass knuckles have been the family’s flashiest possession.

Jack uses his new riches to woo Bertha (Mia Wasikowska), the not-unwilling daughter of a Mennonite preacher. It’s a mildly charming courtship that goes nowhere unexpected, which could also be said of the film’s other major romance, between Forrest and Maggie (Jessica Chastain), a city girl who arrives one day and gives herself a job in the Bondurant’s general store/restaurant. The constantly bemused expression Maggie inspires in Forrest is entertaining enough, but it speaks to the generally fuzzy character development on display here: Forrest never seems able to figure out whether he wants to be a grunting, gruff man of few words or a backwoods sage, so why should Maggie be any less confounding?

Despite the outbreaks of squirming violence, there’s a lack of urgency to “Lawless” that makes it feel like the film is simply chugging along, hitting the required beats, rather than propelling itself forward toward its bloody climax. Rakes pursues the Bondurant boys, but not out of civic duty or moral obligation – the sadistic, effeminate lawman is more corrupt than the vaguely honor-bound brothers. Their conflict boils down to a power struggle, but between what? Evil and more evil? Violence and sadism? I see little inherent heroism in a blood feud between opposing criminal forces. There is marginal intrigue in Jack’s fall from innocence, but by the time little brother finally takes up the gun, the point has been made: all men can be pushed over the edge.

There is an inevitability in “Lawless” that was joyfully missing from “The Proposition,” which also ruminated on fraternal ties and the ambiguity of forced civilization. But in that film, the audience was left wondering right up until the final minutes regarding which side Guy Pearce’s ambivalent protagonist would fall on. Here we simply wonder how much the Bondurants can endure, a question Hillcoat and Cave ill-advisedly stretch to near-comic effect.

Flashes of a more high-energy, daring genre flick occasionally break through the mold. Some rollicking bluegrass music over the film’s opening titles promises a sprightly tone that quickly gets smothered by Hillcoat’s penchant for somber, dimly-lighted confrontations. And a brilliantly unsettling scene in which Jack drunkenly intrudes on a Mennonite service could’ve been dropped in straight out of “The Proposition,” but the incident seems ultimately inconsequential to Jack’s pursuit of Bertha, and thus to the entire film.

“Lawless” has no particular weaknesses: the direction, cinematography, writing, etc. are all exceedingly competent. Likewise the talented ensemble all perform admirably, even if Hardy, Clarke and LaBeouf can never quite decide what their family’s accent should sound like. If there is any standout it is Pearce, but then madness always attracts our eye faster than decency. “Lawless” gambles that alone will be enough to be worth the journey, and maybe so – but just barely.