(Craig Campbell)– I had a hard time keeping up with writing weekly posts this summer. It’s not that I didn’t have enough time – I have less time during the year here at school than I did at home – but somehow the lonely summer sun beating through an unusually uncomfortable smog dulled the pace of my curiosity to a near standstill. Employment in a suburb’s Parks and Rec Department, I think, somehow erodes at all intelligent thought; the combination of chlorinated water, the smell of sunscreen, and screaming children insidiously eats away at creativity until you’re only left with the pool on your mind. Instead of learning, growing, or exploring this summer, I spent 8 weeks coaching swim team. Between the 6 college-age coaches, my coaching staff was responsible for about 210 kids. My team, for mid-level development swimming, consists of 75 youngsters.

If you want to witness the worst of humanity, spend 8 hours at the pool. As taxpayers, many patrons feel entitled to treat the pool (really just a reservior of public filth) as their own personal playground. Once a man refused to leave the pool after a biohazard (someone vomited in the water) and after a number of warnings, lifeguards had to summon police in order to remove him from the water. Yoga moms, with their Diet Cokes in hand and stroller in tow, often struggle for up to 5 minutes with the lock on our baby pool before giving up in dejected frustration. Below the latch reads the sign: “TO OPEN THE BABY POOL, PLEASE CONTACT A LIFEGUARD.” After a certain point of seasonal employment at the park, people-watching becomes more sad than entertaining.

It’s incredible what some people come to expect. Parents pay a total of $80 to register their children to swim for the entire season, which comes to less than $1 per practice. So basically they pay $1 an hour for a group of highly trained coaches to not only babysit their children, but also teach them to swim, a skill that costs thirty times as much in a cheap private lesson. In my duty as director of team communication, I dealt with an endless stream of email complaints. My first year coaching, I suggested we activate a “coaches email” to which parents could direct inquiries to us via the web. The first year, people were thrilled with how we made the team so much more accessible by providing weekly updates about team business and acclimating new families to our traditions. This year, however, parents routinely emailed us about the perceived lack of attention to their child, spamming our inbox with every mild cold or baseball game their kid had. They were infuriated when they did not receive replies in a matter of hours. It’s like Louis C.K. says, “You can’t complain about something you didn’t even know existed 30 seconds ago!”

After a school-organized party last year, I came to practice with a henna tattoo of a panda on my forearm. Amid the gossipy whispers of the suburban mothers who didn’t realize it was fake, a couple voices sounded off to my mom about how my new tattoo (apparently reminiscent of gang tattoos) was inappropriate material to be displaying in front of children. A different season, before a race, a father behind the starting blocks turned to his eight year old daughter and told her, in earnest, “Sweetie, if you don’t win, you’re grounded.” This is a community, recreational swim league. Remember what I said about the worst of humanity?

About three times every season, we hire a DJ for a night of dancing with our kiddies. I’m always baffled that these DJs make careers out of playing music. We pay them hundreds of dollars for a few hours of a pre-packaged set of Radio Disney songs. One song ends, or is cut off in the middle, and the next one starts – an iPod could do as well. But no one else seems to notice, or care, about this waste of resources. The kids usually use the occasion to grope the coaches in entirely inappropriate places. The parents, happy to hand over responsibility to us, take the opportunity to get wasted, allowing their dialogue with coaches to degenerate into drunken slurs about the racing speed of their children.

So basically swim team parents are pretty much the worst. But that’s not to say that it was all bad! Coaching swim team is perhaps the only job where one can conduct administrative work topless. Unlike the lifeguards who had uniforms to wear, the coaches were free to dress how we pleased, meaning on muggy afternoons we wore no more than a pair of gym shorts to work, and on the cold mornings we showed up in many insulating layers of pajamas. You’d expect that on meet days, the most active, stressful part of our job, we’d pull our act together and try to look professional, right? Among our five meets this season, we dressed once as Christmas in July, another as Lion King characters, another in togas. For our championship meet, we’ve dressed as American Indians (I only wore a loincloth), Star Wars (painted my entire body gold as C3P0), and this year, in body suits as the five colors of the Olympic rings. Often, the children don’t understand our costumes (“What are you supposed to be, you look like pee!”) but despite my complaints, this part of the job is fun. And even though the parents are difficult to handle, there are a few children that almost make a summer home at a pool worth it. Mostly, though, it’s a reminder of why I’m never having children. 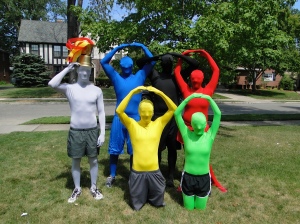 But summer is quickly fading to memory, the leaves are changing, and darkness is falling at 7. I will not be returning poolside next year, but I was able to squeeze out enough material to write a post about the experience. Now I’m back in Western Mass, AC Voice is running smoothly, and I’ll be posting regularly for the remainder of the year. It’s good to be back.