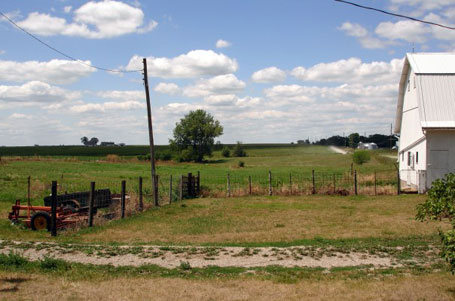 (Marie Lambert)– In just over a week, I have swung dramatically from one end of the job spectrum to the other: from interning with a non-profit in an office in Manhattan, to selling tickets to the Iowa State Fair in a small booth in my hometown. Not only are my daily tasks vastly different, the type of people I interact with has changed significantly.

First, some background. The Iowa State Fair is a yearly ten day long festival of all things Iowa: animal judging, vegetable contests, rides for kids (complete with creepy carnies), crafts shows, concerts, vendors selling anything you could imagine (from hot tubs to Shamwows) many beer tents, and food. SO MUCH FOOD. The diversity and oddity of the food is probably one of fair’s main attractions. We’re talking lots of things fried that shouldn’t be fried (Twinkies, mac and cheese, butter), and lots of things on sticks that you normally wouldn’t find on sticks (peanut butter and jelly, cheesecake, salad). Along with those from the nearby metro area who attend the fair for entertainment purposes, the ISF pulls in a lot of rural Iowans who prepare all year to show their animals and win ribbons and money at various competitions.

Consequently, the demographic of State Fair employees—older, white, and not college educated—is very different from the demographic of the people I’d been working with in New York. And because I started working at the fair less than a week after I’d left the City, the transition between the two environments was so sudden that I felt kind of alienated from my fellow Iowans, who although many of them were strangers on the first day of work, soon seemed to strike up casual conversations and easy friendships among one another.

It didn’t help that I had just returned to a home with no internet, newspaper subscription, or reliable TV (only a temperamental aerial antenna and no cable). I was very out of touch with the average Iowan, and still am. I discovered, however, one topic that can breach even the most awkward of silences.

“So… nice weather we’re having, right?” Thankfully, Iowa weather is so bizarre it’s always a socially acceptable conversation topic, and I have managed to fend of most of the awkwardness for my first three days of work.

While my lack of connectivity has been frustrating because I am severely behind on current events (I think I was the last person to hear about Romney/Ryan) and it means I can never get these posts up in time (apologies to the editors), it has also been strangely freeing. Without internet or TV to take up the time when I’m not working, I spend most of my hours outside or reading, often both, and reminiscing about childhood summers spent just the same way.

“Summertime, oh summertime, pattern of life indelible,” E.B. White said in his essay “Once More to the Lake,” a nostalgia-filled ode to the season. And when one is home, and the August sky is blue and the sun is hot, and you are pretending you don’t have to work a nine-hour shift later in the day and that your only care is whether to yield to the lure of your sleepiness or the lure of your book, yes, summertime does feel indelible and eternal. Age fades away, and it is so easy to long for the days that used to be.

This is what the State Fair is for me as well, not just a source of income, but a fountain of nostalgia. My mom and my grandparents and I went to the fair every year for as long as I can remember, always following the same traditions: eating at the pork tent, sliding down the giant slide, perusing prize-winning art, petting the animals. And although my grandparents have since left Iowa for warmer climates, and I no longer eat meat and am no longer entranced by the magic of the Midway, I still visit the fair every year. As kitschy and garish of a spectacle as it is, it is still a part of my history and a part of my home. No matter how far I travel or where I live, bring me to Iowa during State Fair time and I am an Iowan—and a child—again.