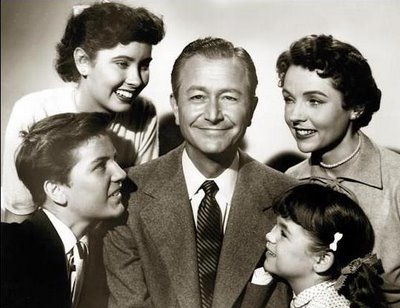 While I’m happy (and so, so thankful) for my life and where I am right now, lately I’ve been feeling somewhat increasingly discouraged with the state of the world. I’m sure I don’t need to explain myself too much here—turn on the TV, look at the papers. I’m sure that at some point everyone feels fairly bombarded by the world’s seemingly endless arsenal of troubles, often all the more troubling because we feel we have no control over them.

Maybe it’s this disillusionment with our present that pushes us to idealize the past. Twice in the last couple of weeks I’ve had conversations during which someone has expressed a desire to live in previous decades, when “times were simpler.” The 1950s are often referenced in a way that brings to mind images of idyllic, low-crime suburban homes, white picket fences, and 2.5 well-behaved kids and a dog. At least until I’ve reminded the wistful dreamer of the 1950s’ other legacy: that of rampant racism, sexism, homophobia, and the Cold War. Leave It To Beaver doesn’t seem so innocent anymore, does it?

Today I was reminded of how easy it is to fall under the spell of history as I visited the Metropolitan Museum of Art. The Met is by far the greatest museum I have ever seen—not just in terms of sheer building size, but in the breadth of history it encompasses in its collection. From Egyptian tombs to contemporary abstract paintings to 19th century American furniture, the Met is an amazing institution where one can learn about almost any period of the world’s history.

I found myself particularly captivated in the wing dedicated to Greco-Roman art and artifacts. Reading an informational plaque about a Greek symposium—basically a party where one would drink wine and have intellectual discussions—I had a strange sense of longing, almost nostalgia, for an age I had never lived through. After a minute or so of wishing I had lived in Athens in the 5th century B.C.E., I came to the odd realization that I would not have been able to participate even if I had been alive.

To Greeks (or any civilization that I’m really aware of) at the time, I would just be a woman. Not a citizen, not even a person really, just an object to be owned, and only valued if I could have children and keep the male ones alive. I knew this; I’ve studied this time period, so my realization shouldn’t have been a shock at all. It just felt weird.

I love Classical history and culture; it fascinates me to no end. But I think I may have been imagining it as something it isn’t. How can I revere a time period so much while still being aware of its flaws? Many wonderful things came from Ancient Greece, and that is what we remember. I would not have us forget the art, the literature, the philosophy, but neither do they absolve the civilization (or any civilization) of its shortcomings.

So while the lure of nostalgia can be strong, I struggle to restrain myself from idealizing the past, and instead to stay in the present, and to be grateful for this time despite its flaws.