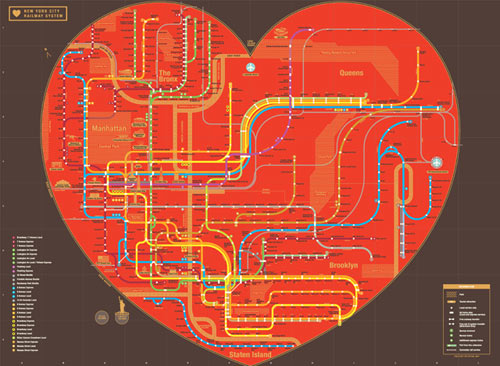 Reading over my last post just now was an odd experience, oddly enough. The HazelWeatherfield of last week was obviously excited to be in New York, but at the same time fairly terrified of the city (I tried really hard to hide that). My main apprehensions were of the subway, the huge mass of people, failing at my internship, and the huge mass of people.

Oh, silly Hazel of a week ago.

As cliché as I know it is, last Saturday seems like much more than seven days ago. Thankfully, I didn’t start my internship until Thursday, so I had most of the week to walk around and acclimate myself with the city. And the city and I became quite acclimated. Okay, so it’s still only my first week, and I don’t even pretend that I know my way around very well, but if you name a street then I can probably point out roughly where it is. As long as it’s not a totally tiny, obscure street. And as long as it’s in Manhattan. Excluding everything above the north end of Central Park. But still!

I have a tendency to make my expectations for almost anything really low because that way I’m less disappointed if things don’t turn out well. So I’ve actually been really happy with the way things have been going so far.

Yes, I was confused as hell by the subway at first, but after extensive studying of the map and this handy app called Hopstop (accidental rhyme), I’ve been able to navigate my way around without too much trouble. And to date, I have not yet gotten on the wrong train—I have gone to the wrong platform a couple times though.

My second significant fear was that I would be overwhelmed by the sheer mass of people that inhabit this city. I would most definitely characterize myself as an introvert who frequently values alone time, and I was worried that I would go crazy with people around me all the time. But strangely, this hasn’t been a problem. I actually love to watch the people around me on the subway and the street (yes, I know I’m a creep). The population is incredibly diverse, and everyone seems so different in their own way and yet I feel like everyone is interconnected by a shared “New Yorker-ness” that comes from living in this city, like some unwritten code of conduct that they all know and I desperately wish I knew.

Despite that, here are three reasons I feel very at home here:

1. I’m a natural speed-walker. Even if I not in a hurry I like to move at a brisk pace, and I cannot stand it when I am stuck behind a group of casual amblers who will not move to their proper place on the right side of the path. If anyone has ever whizzed frantically by you on campus, it’s likely it was me (sorry). Most of New York’s pedestrians seem to support me on this one. We like to move quickly, like we have very important things we could be doing.
2. Call me antisocial, but I hate chatting with strangers in transient public situations. Maybe I’m just one of the many of our generation who apparently suffer from stunted face-to-face social skills because of technology and social media, but please, I’d rather just enjoy the solitude of my book on the train than force a conversation with the person next to me. This was a constant problem for me in the Midwest, where some people are so terribly friendly that they are not deterred by the fact that I have headphones in my ears and will start a conversation regardless. No such problem on the subway here! If I don’t want to interact no one will think me rude because they don’t seem to want to interact with me either.

3. I’ve only been in this city a week, and I’ve never been happier to be a vegetarian. There are so many incredible vegetarian and vegan options at restaurants that I don’t have to worry about plain salad being my only option. And there are even places that serve exclusively vegetarian/vegan food! This is a complete novelty to me. I didn’t even realize that places like that existed because we sure as hell didn’t have them in my hometown, where vegetarians were few and far between. It’s a good thing I’m on a limited budget, or I would actually go out for all of my meals and become outrageously unhealthy from all of the vegan bakeries that I seem to see everywhere.

So first week in New York=good. Oh hey Hazel, what about that internship you’re doing? You know, the reason you’re in New York at all.

Even though I only started this past Thursday and so have only worked for two days, I’ve really enjoyed those two days. Everyone in the office in incredibly friendly and welcoming, the research I’m doing is interesting, and there’s a café next door that makes awesome tomato mozzarella paninis (I must limit myself to one a week). I almost accidentally stayed in the office an extra hour on Friday because I was working so intensely I didn’t realize that everyone gets off at four on those days until I was kindly informed that I was allowed to leave if I wanted to.

Things have been good so far (knock on wood). I even got to spend some time with the lovely ConstantLy IRL. So here’s hoping that come Monday, my first full work week will go just as well as the past two days.