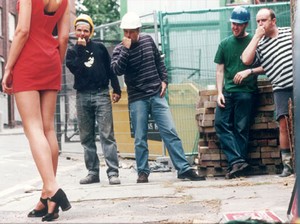 (Liya Rechtman)– When I return to New York after a stint at Amherst, I always feel myself blushing and pleased with the first “oh heyyy” or “uh huh, tha’s right” that I receive from a construction worker or a man on the subway. There are moments of pride in being recognized as a sexual entity. Even though I certainly have had my romantic forays at Amherst, on the day-to-day – and outside of the flickering glimmer of strung-up Christmas lights reflected in our faces on a given Friday or Saturday night encounter – Amherst can be a pretty sexually limited place. Honestly, if some guy I knew called me “babe” from across social quad or even in conversation, I would be rightly offended. Catcalling from strangers in the city, when done correctly, is an entirely different beast.

Obviously, the caveat of “done correctly” is crucial here. There are many, many different kinds of catcalls and attention from strangers on the street. Especially when I was younger, I was a magnet for crazy people and creepy gross men on the subway. (This is most likely because I didn’t get the memo about looking down and pretending they weren’t there. I was a shade too curious.) I have been the object of everything from the all-too-frequent ass grope to a man getting in my face as I was walking home to inform me that he “wanted a piece o’ that there pussay.” These are the terrifying moments that qualify as sexual harassment. They are the reason that parents of City kids wait up at night in fear and why my mother made the rule in 10th grade that either a friend had to walk me home or I had to take a cab.

Just because incidents of Street Harassment are so terrible doesn’t mean we should discount the other types of catcalling. I once had the very very old Italian shoe-shiner around the corner from my house call me over to him to tell me that I looked beautiful, just like his deceased wife. He was so earnest and I was so touched that I sort of teared up. More commonly, there’s the occasional friendly construction worker with the nondescript acknowledgement of sexuality. These encounters of the construction-worker variety are most respectfully done during the day and from something of a distance. In other words, at an appropriate time and place that is non-threatening to the woman.

Given all of those specifics, I would argue that it’s nice to have a stranger tell you that you look good on your way to work in the morning, or dinner in the early evening. Getting checked out briefly on the subway by someone sitting across from you is a nice pick-me-up and should not be discounted.

The question becomes: is catcalling objectifying or empowering? One could say that my reaction to catcalling is merely the internalization of an objectifying norm. The Meet Us On The Street Campaign sees all catcalling as sexual harassment and Julie Gadzag agrees, writing that catcalling is an “aggressive assertion of male dominance by dehumanizing and hypersexualizing someone.”

I can agree with Julie that catcalling is certainly an assertion of masculinity. But there are many ways that masculinity can be asserted that aren’t unwanted. I dress in such a way that showcases my body because I am body-positive and proud of how I look. I therefore think its okay for people who find me attractive to let me know. That doesn’t mean I’m okay with being touched or followed or humiliated in public places/by strangers, but I am open to a genuine and respectful compliment. Feeling good about yourself can be powerful. What becomes dangerous and dis-empowering, though, is when a woman counts on receiving catcalls in order to feel beautiful – another fine line in the landmines of a catcalling forum.

As for Julie’s argument that catcalling is “dehumanizing” – I must wholeheartedly (and happily) disagree. What’s dehumanizing about being called out for being notable? For being capable of looking less like a vegetable wilted in the almost unbearable heat and humidity of a New York City summer and more… flowery? Quite to the contrary: I find the ritual of applying eyeliner and lip gloss before stepping outside to be humanizing. Putting on makeup allows me a contemplative moment alone with my own face and a reflective surface, a re-grouping just before I step into the steady stream of the street. I see my support of catcalling as originating in my very notion of myself as a feminist.

In a world that can be so body-condemning, with media blasting at us from all sides 24/7 telling us that if we aren’t double 0 at the waist and double D at the chest that we’ll never find happiness, it’s empowering to be reminded that The Real World isn’t really like that. I remember being 15 and just starting to deal with the mountain of body issues that accumulate for most people during puberty while simultaneously figuring out how to dress for a Wall Street internship. That summer I had my first positive interactions with respectful, empowering catcallers.

Once we dismiss the question of whether or not I’m self-objectifying or self-empowering, we are left to untangle the phenomena itself. Why do some men catcall and why is it more appropriate for a construction worker to call me babe than a classmate or coworker?

Initially I wondered if I felt comfortable because of the socioeconomic (and racial) boundaries that kept me separate from Them. However, I realized that I had interacted with catcallers from a wide variety of racial backgrounds, and saw no specific delineation either between what they said or how I felt about it. Perhaps I feel comfortable being catcalled by strangers in the city for just that reason: they are strangers. The catcaller on the street will not be deciding my summer stipend or my social life. Other than choosing whether or not to catcall me, and what exactly to say, the guys who sit by the subway and construction workers on 14th street hold no sway in my life.

All of this being said, if you are reading this post in the hopes that it will inform you about how to properly tell a random woman across the street that she looks hot, I urge you not to. The discomfort that some people feel about any kind of sexually charged acknowledgement (assertion) in public space is very real and valid. I am one woman with one particular opinion. I take pride in being told I look beautiful by strangers, but I do not speak for anyone else.

PS
If you’re experiencing harassment on campus or on the street check outHollaback for help.