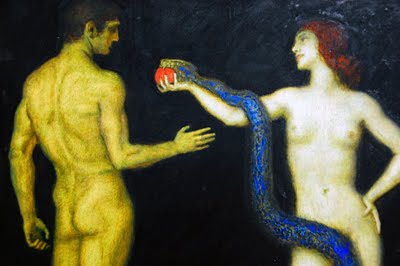 I sometimes went to Sunday School as a kid, and while most of the biblical stories I heard seemed logical enough, I never quite understood God’s prohibition on the tree of knowledge. Why keep knowledge from your people? In high school, my ethics teacher taught us that the God in Genesis was often read as a jealous God; he wanted to keep divine knowledge from his people so they didn’t stray. Yet something didn’t quite fit to me.

“To know” in the biblical sense means to have sex; this is a widely recognized fact. Actually, biblical scholars say that “to know” connotes not only sex, but also surrender and union. Somehow, between this widely recognized “to know=sex” and “the tree of knowledge” our prudishness has kept us from connecting one concept with the other.

According to Genesis, Eve sees the apple as beautiful, a delight to the eyes. Eve takes a bite, but nothing takes effect until Adam bites too. The “knowledge” comes when they act together. Suddenly, they realize they are naked. It is the apple which introduces sexual shame. Eating the apple is not simply a fall out of blissful ignorance, it is a fall out of blissful sexual ignorance. Before Adam and Eve had only known the command “be fruitful and multiply.” This is the sex of animals. But humans, thanks to Adam and Eve, are subject to the surrender of love. Once banished from Eden, humans are cursed to forever lust after complete union and “knowledge” (in the biblical sense) with another human being. God was jealous, not of our consciousness, but of out sexual love for one another. After all, the first sentence after Adam and Eve leave Eden reads: “Now Adam knew Eve his wife, and she conceived and bore Cain”

Now, I don’t read the Old Testament as a holy scripture; it’s not out of a lack of respect, and it’s certainly not that I don’t think it has deep meaning; quite the contrary, I see Genesis as a text full of deep latent meaning that needs to be uncovered with careful reading. There’s a lot of truth in there. It explains why we’re so constantly unhappy, falling in and out of love…but can it ever live up to the first bite? Genesis seems to answer “no.” Nothing on Earth will taste as sweet as the bite of that apple. As much as it forms us as beings who will always seek love, we are also beings whose earthly experience of love will never live up to the expectations we inherit. It’s a harsh truth, but I think it fits.

I don’t mean to offend anyone by offering an unconventional interpretation of Genesis. It’s a dense text, and it clearly has many layers of meanings. But it does make the story of Genesis, for me at least, a more relatable creation myth.

I leave you with a few images: