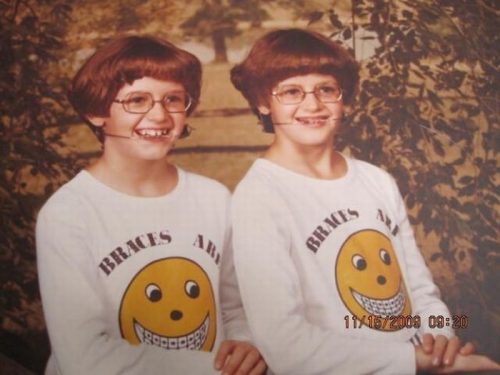 For the sake of laughter…Here goes the most embarrassing post of my she-BOMB life: (I think I already regret this)

2. I had that first period experience.

So you know the girl who has her first period and it gets all over her white pants in middle school and you just want to die for her because it’s so embarrassing? I can tell you it’s worse to *be* that girl. I tied my sweatshirt around my waist and contemplated wearing my brown lunch bag over my head. Puberty is cruel.

3. My older sister and I nearly hung our cat as children.

Mittens Tom Kittens Kelley (Yes, we gave him four names) was a distinguished member of the family, not to be bothered by simple younglings like my sister and I. Well, not if we could help it! I took turkey chunks from out of the fridge and laid them in a line in the yard. He followed my trap perfectly, and with all of my agility, I snatched him up! We tied a leash to his collar and put him in our fort. “Now we’ll have him for forever” I thought and chuckled evilly. “Don’t worry kitty, we’ll be back”

Of course, the cat, who wanted to escape his fate of being dressed up in doll clothes, jumped out of the fort. But he was connected by a rope we tied to his neck. (fuck.)

Thankfully, our parents had the foresight to realize that children are like little balls of death constantly threatening the lives of helpless family pets, and they granted Mittens-Tom-Kittens a safety collar (it breaks when pressure is applied to the band….) He escaped with his life, and my poor mother was left again with the responsibility of explaining the physics of hanging. (More depressing than bedwetting, but less shameful I suppose. Perhaps a step up…)

4. I believed in an alternate-unicorn-realm which I would access via a tree stump.

I know-I know. None of this makes sense. What’s worse is that I believed in this alternate reality well into middle school. Active imagination or impaired mental development? The world may never know.

In short, my friend Claire and I would follow her dogs around her property (this was INTENSE) and any time they sniffed a tree stump (it was a sign to us that this was indeed THE tree) we would stand on the stump in different formations so that we might transport into the parallel realm where we would live among nymphs and unicorns and rainbows.

So, I really wanted this visor. First of all, why the hell did I want to wear a visor? What good is a visor? OkOK, I’ll put that aside though; I was with my best friend and her mom, and the visor I wanted had a 69 on it. Naturally, since I was young, innocent, and still between sizes at kid gap and adult gap, I did not understand the sexual connotation. My friend’s mom, of course, also refused to let me buy said visor, so I protested, and decided I didn’t care what it meant, the colors were pretty.

My friend had to take me aside and explain to me what it meant. I can still remember the way my face contorted. (people put their mouths on each other’s GENITALS??! at the same TIME?! SOMEONE ERASE MY BRAIN! I just want to go back!!!) Needless to say, I didn’t get the visor.

6. (#mostembarrassing) I actually posted this to the internet. If you are a potential employer, this isn’t truly BKflamebroiled, it’s my evil-step-sister from the other alternate realm where they steal unicorns and kill little girls’ dreams.

Right. I could go on about how I had the worst, most slobber filled first kiss ever (and then took a 4 year hiatus from kissing it was so terrible), or I could just keep talking about bedwetting, but I think I’ll spare you the gory details…

Much love! I hope that the demise of my personal reputation gave you a few laughs.