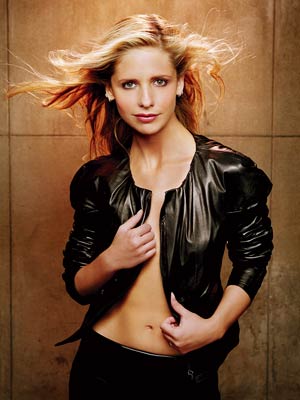 My heart yearns for their stories, for their adventures, their characters. I consider Buffy, Willow, Xander, and Giles my friends, my fellow evil-fighters, yet I must recognize, to my own chagrin, that they are actors only playing the roles of epic-historical figures. Thus, to follow my obsession to the end, I will reveal a multi-segment special report on the current whereabouts, projects, follies, and foibles of the cast of Buffy the Vampire Slayer.

films have included The Grudge, I Know What you Did Last Summer, Scream 2, Cruel Intentions, and the Scooby Doo series. Though her repertoire often overlaps with monster/horror films, she resists the urge to be typecast, performing with dynamism and skill in psychological dramas. While researching my beloved heroine a few days ago I stumbled upon her new prime-time drama for the CW––Ringer. I had to check it out, so I watched the first nine episodes and fell in love once more with Gellar’s skill in expression and portrayal of complex feeling. She decided to do the TV show to spend more time with her new family, but has also been involved in a few independent films such as Veronica Decides to Die (2009) and The Air I Breathe (2008). In 2002 she married Freddie Prinze Jr., and in 2009 gave birth to daughter Charlotte. She has four tattoos (reppin’) and is a taekwondo black belt (how could she not be after 7 seasons as a vampire-staking superhero?). I will definitely keep up with Ringer, but since CW has such a terrible online user-interface I may have to wait until I can pirate episodes online.

Alyson Hannigan has actually had a very successful acting career since her geeked-out start on My Stepmother is an Alien (1988). She is probably most well-known for her role as Lily Aldren in How I Met Your Mother and Michelle Flaherty in the American Pie series. The final installment (we can only hope) of American Pie (“American Reunion”) is in post production and is scheduled for release in 2012. In an interview with “The TV Blend” Hannigan stated her disapproval for the proposed Buffy the Vampire Slayer Movie remake, citing the absence of TV writer Joss Whedon as a crucial part of the Buffy franchise. As with all of the TV series stars, she had little knowledge of her character Willow’s character development in Buffy Season 8. Her favorite episode? The musical, Once More with Feeling.  In 2003 she married Buffy co-star Alexis Denisof (the estranged Watcher Wesley), and in 2009 she gave birth to her daughter Satyana in their Santa Monica home on her birthday.

Nicholas Brendon is not doing so hot. Since the end of Buffy in 2003, he has starred in a few made-

for-TV movies on ABC family and guest-starred infrequently on soap operas. His most recent project was a 3-episode arc on Private Practice, the Grey’s anatomy spin-off, in which he plays a mentally disturbed man who assaults one of the doctors. He is an important figure for the Stuttering Foundation of America (who knew?) and served as their honorary conference chairperson from 2000-2003, but since then has been in and out of rehab for alcoholism. He has a twin brother!?!

At ComicCon international in 2007, Joss Whedon talked about a 90-minute spin-off for BBC called “Ripper” that would give Giles’ backstory. That would be awesome, but Whedon is definitely a man to propose ideas and run off to another project, forgetting all about his loose ends. As anxious fans wait for a Buffy reboot, they can

take a look at the 4 million other projects that Anthony Head is involved in, mostly for BBC and other production companies in the UK. The above-mentioned musical Buffy episode, Once More With Feeling, led Saw director Darren Bousman to cast him in his horror-rock opera musical, Repo! The Genetic Opera (also starring Paris Hilton and Alexa Vega). Head is also currently working on BBC series Merlin as the father of Prince Arthur. He lives in Bath with partner Sarah Fisher and has two daughters who are also actresses, Daisy and Emily.  (Sucks to be named Daisy).

I hope you enjoyed this first installment of “Where are they now?”  If you would like to see a specific character researched next time, reply in the comment below.