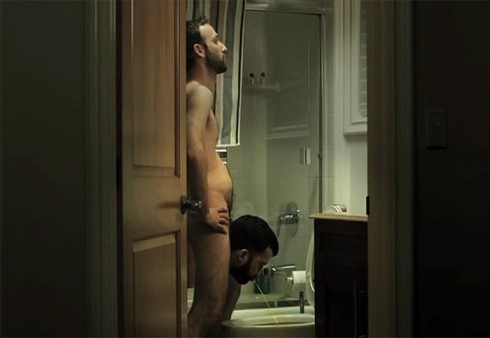 Happy Parents Weekend fellow Amherstians! In honor of the weekend I dedicate my analysis of the following video to my darling parents, without whom I would not have such a peculiar taste in visual aesthetics today. This video was suggested by my father a few weeks ago, but until this morning I was not able to feast my eyes upon its glory.

Let me begin by commenting on the song itself—though at first I was appalled that it was of such a lesser quality than Duck Sauce’s more famous comedic single “Barbra Streisand” (featured below), now that I have listened to it approximately five times for the purpose of this post I cannot get it out of my head. But then again I am a person that would be inclined to a song that is basically a remix of wolves’ howling.

The video is obviously a pun on the idea that men think with their dicks (or more concisely, the idea of “dickheads”), but it also appears to stress how the men lack control of their wild, wolf-like members. In the first scene where the dickheads are unveiled their owners frantically survey the scene looking bewildered and embarrassed, and Armand even tries to cover his dickhead’s mouth to conceal its presence. Later, when Armand and A-Trak are grooming before a night on the town they soap, shave, and comb themselves and their dick-heads with equal care, signifying the tender affinity that men feel towards their penises. This  juxtaposition reveals the complicated balance within men between estrangement from their sex drive and its seeming autonomy, and the physical pleasure that it brings to them, along with the male identity that it reinforces.

I was not expecting the women to have sex-organheads as well. This was a comedic addition that did make me smile when the rotund woman in the middle pulled up her dress to reveal a heavily bearded “vaginahead”, mostly because I thought the jab at female chastity was well-played.  Women are driven by a sexual need to the same extent as men in this video (maybe only under the influence of alcohol, as the interaction takes place in a bar). They are also driven by instinctual recognition of pleasure (or the internalized memory of past experiences, depending on which motive is more significant to them) to use and flaunt their sexuality, and are also cognizant of and detached from their sex drive.

When the various characters are sleeping together we see their sex-organheads interact as separate entities, paired off in mutually occurring but entirely separate sexual experiences. A comment on the division between mind and body and sex’s connection of the two? I think so. In a video that relays this to the general public, managing to be intellectually engaging while also humorous (unlike The Hangover)? Indeed. Bravo Duck Sauce, even if your aim was to make big bucks, you are addressing some issues of gender and sex here and for this I applaud you.

Sidenote: I love that the only extra sound effects were of unzipping jeans and clothes falling to the floor—a play on auditory memory.