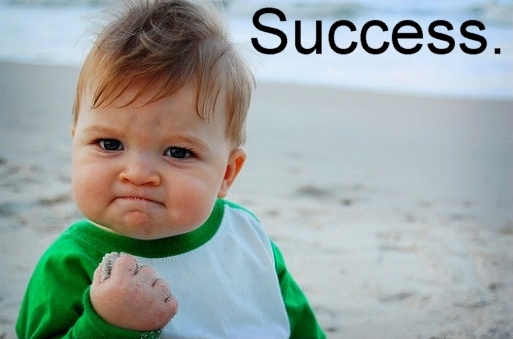 (Craig Campbell)– Hey She-Bomb. I’m a new writer for the site. Get at me.

Recently I have attended two different (mandatory) seminars stressing the dangers of a perfectionist work ethic and the value of learning from mistakes.

The first was put together by the well-intentioned but ill-conceived “Amherst Leads” program, which is supposed to teach freshman varsity athletes how to cooperate and demonstrate leadership on and off the field.

The program directors brought in a motivational speaker who was introduced as a “PhD, Author; World Renowned Sport Psychology Consultant.” The much-too-energetic speaker launched into an hour-long explanation of his discovery of Eastern philosophy and its valuable applications to sports psychology. He gathered us into a circle and discussed both the mystical profundity of the “big O” – yes, he actually said that – and the ancient Native American tradition of passing the peace pipe before (?) battle. But most importantly (the reason he was paid to speak to us) he told us that it was essential to minimize our failure-to-success ratio.

Somewhat contradictorily, he went on to explain how our failures, though disappointing, define us more than our successes and that the greatest life lessons are learned from the most disappointing experiences. He concluded his speech by wishing us well with a two-word Chinese axiom, which, according to him, loosely translates to “summit the mountain of hopes and dreams and harness the fire breathing dragon of ambition while learning from the cold wind that is the sum of your mistakes.” Or something like that.

The second program that addressed this sensitive subject was the final evening of Amherst’s First-Year Extended Orientation events, which was supposed to focus on mental health. (It didn’t, really.) The liberally interpreted “RESILIENCE” topic was closer to a quasi-motivational program than a session providing information on Amherst College’s counseling services. Some woman asked kids in the audience to describe a failure that they had experienced, what they learned, and why they are better because of it. The evening concluded with Onawumi Jean Moss – self-titled “Amherst’s resident storyteller” – delivering a charming speech, ending in a sing-along rendition of “O-o-h Child.”

I understand the apparent safety net provided by the notion that it’s okay to fail – I don’t doubt that for a second. But both speakers reiterated the point that it’s our failures that come to most thoroughly define us; it is not our successes but our failures that have made us stronger, and it is from our failures that we learn the most. But if this is all true, then why do we even bother spending all our time striving for success?

In comparison to institutions of comparable educational merit, Amherst is frequently praised for the relative lack of cutthroat academic competition. But, admittedly, it’s still important to reassure the student body that it’s natural, normal, and healthy not to live up to expectations. However, by emphasizing the fact that failing is acceptable, the dialogue on academic pressure is still focused on the dichotomy between failure and success. Which is an oversimplification that perpetuates the unhealthy obsession with success that these seminars attempted to minimize.

Instead of the polar pairing of success and failure, I prefer this model: 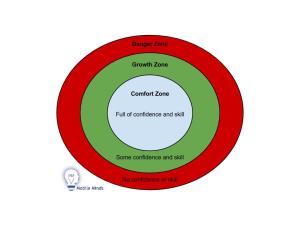 Comfort zone, growth zone, danger zone. Some success may be achieved in totality within our comfort zone, in which case we don’t gain anything from the experience. Some failures may be in the danger zone, meeting the standard interpretation of failure as a crippling experience. But more often, people can adjust their fears and limits to include the “failure” in the learning zone, in which case the word failure no longer even applies.

Do something every day that scares you – that’s how you grow, that’s how you learn. Not by searching for meaning in something you define as “failure,” but by pushing the boundaries of what you consider comfortable or normal.