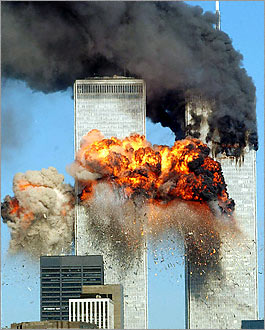 I didn’t really think about the “day of remembrance” at all . I noted when I woke up that my more patriotic friends were declaring their national allegiance and empathy towards those who died 10 years ago on Facebook, but to be honest these are the same people that I can count on to endorse Sarah Palin and condemn abortion on a regular basis. I went about my day, also taking note of the poorly-attended BBQ outside of Hitchcock, the 80% humidity, and reminding myself of the interview I was to administer later in the day. I was more concerned with my fellowship application and completing various assignments for my psychology class than taking a moment of silence myself to remember the moment 10 years ago. On the way home from the library at 9pm I walked by the gigantic American flag on the town quad and noted the 15 or so attendees of what appeared to be a speech given by the chief of the fire department. I thought about going over to watch, but then I remembered that I was tired. Apparently there was also a memorial march. Who knew.

I made no attempts to engage with my fellow students on the subject (even for the purpose of writing a post), and only discussed with my close group of friends the particulars of our 9/11 memories while we hiked up Mt. Tom on Saturday morning. We were all in 4th grade, we all watched the news during school, some of us went home, and all of our parents worried that the closest capitalist landmark (Sears tower, Disney World, Patrick Air-force Base) would be blasted to bits at any moment. We looked to the token New York resident for a tale or two of a friend of a friend’s parent who had made it alive or not. I suppose we took a moment of contemplation to think about the day, but any sort of larger reflection was averted.

I felt a similar solemn but detached acknowledgement of Bin Laden’s death last spring–when the entire country went about jubilant celebration I thought to myself, “Huh, I thought he was already dead”. I felt slightly embarrassed that I didn’t care more, and that I was far more worried about finishing my research paper than baking an apple pie and shooting celebratory rifle rounds in the direction of the Middle East. I don’t think my lack of concern is due to the temporal and physical distance of the event–I wrote my college admissions essay about how the Prague Spring moved me to tears, and this happened 50 years ago thousands of miles away to a people I knew nothing about.

I brought this topic up at lunch this morning with some fellow students, and one commented guiltily that he sort of agreed with the pervasive feeling in other parts of the world that “we sort of deserved it” and that “America during 9/11 is Palestine every day”. Maybe this attitude (one that I also guiltily sort of agree with–note the hesitancy) is more widespread at Amherst than in most other places–this would explain the moment-of-silence-due-to-absence of Sunday’s morning memorial and the town’s poorly attended nighttime vigil. Maybe this also explains why the poster board in Keefe, meant to display Amherst’s “thoughts on 9/11”, was instead decorated with a weak spattering of memories and blanket statements of empathy.

Why are we unable to separate memory from contemplation? For the past 10 years I have dutifully told my “where were you?” of 9/11 with a rehearsed, somber face. Never once has someone asked me how I felt about that day in a non-academic setting, and never once have I really thought about how considering 9/11 the defining moment of my generation’s America makes me feel. I predict that the grace period of respectful empathy is coming to an end, and that the children who saw a renewal of religious/ethnic hatred in their country just as they wrapped up a unit in history class on civil rights will begin to bring their real opinions to the table.

While America’s tax paying population put on red, white, and blue and turned on the TV to watch the ground-zero memorial and re-live the horror this past, college-aged Americans were thinking something else entirely.

What exactly were we thinking?