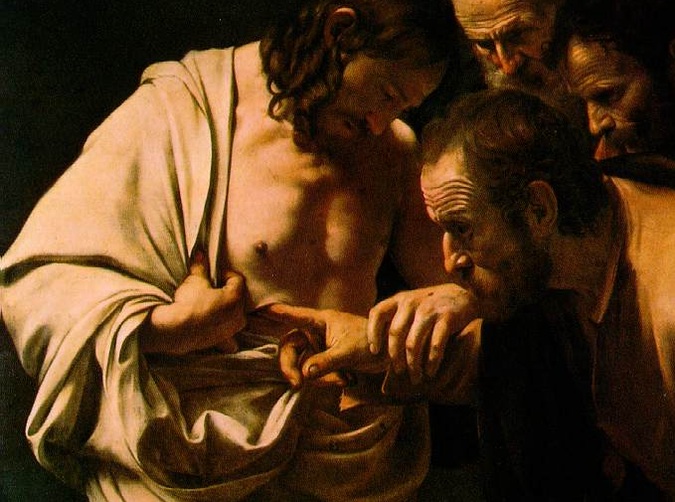 Male penetrability. I said it. Just work with me for a second. St. Sebastian is the gay male figure in art. Sometimes he’s a young boy, but he’s always tied up to a tree with a little white cloth draped loosely on his loins for “artistic modesty,” and, what really makes him famous, arrows pierce his naked body, which means—he’s dying. For George Batailles (Tears of Eros) death is the, get ready for it, ultimate sexual climax….not your type of kinky? Me either, BUT a lot of art historians look to St. Sebastian as a figure of gay male art. I love El Greco’s version of St. Sebastian, painted somewhere between 1576-9 because El Greco’s famous body distortions (which many often reduce to bad-eyesight on the part of the artist) plus the theme of male penetrability makes a surprisingly “modern” piece from this conservative Catholic artist–whether that was his intended effect or not. Dough-eyed and with innocent expression, it’s still hard to call this figure feminine–he doesn’t have the characteristic wide hips or soft arms. Sebastian’s bloodless wounds suggest something else. These arrows penetrate him (even underneath his cloth in his genitals). Horrified? me too, it’s uncomfortable. We normally think of female genetalia as the penetrable one…but, leave it to 16th century Catholic artists to break the major taboos, right?

Still not sold on the male penetrability argument? take a look at Caravaggio’s The Incredulity of St. Thomas. Caravaggio and El Greco are almost perfect contemporaries, and they’re dealing with the same theme, here. Are you feeling as much of St. Thomas’ incredulity as I am? I do every time I look at this piece. It really explores the theme of male penetrability more explicitly–so, naturally, the grotesque fascination multiplies. Why is it more explicit? 1. We (as viewers) have someone to identify with. Caravaggio skillfully pulls us in by letting us participate as one of the many spectators here. We’re just one of many freaking out that 2. Jesus is literally pulling his clothes off so St. Thomas’ suggestive digit can dig around in Jesus’ very vaginal wound. I mean shape plus depth going on here makes it hard to argue otherwise. Plus, it’s not bleeding at all! Which brings me to number 3. this painting is really nasty! so of course we can’t take our eyes away. It makes my skin crawl to think about the reality of this image–WHY ISN’T JESUS FREAKING OUT TOO?!?! Oh yeah, he’s holy. and dead. What is the Christian (on the one hand)/BKflamebroiled (on the other) message in this Caravaggio? Death/male penetration, even when it’s untimely/not hetero-normative is A-OKAY!

So, if you smushed these two paintings together, and cranked it out a few hundred years later, what would you get? Max Oppenheimer’s poster for his own exhibition of course! Duh, right? His piece actually inspired this post. He’s a precursor for German Expressionism–lauded for its experimental forms and bold sexuality.

MOPP (as he signed his paintings) portrays himself rather Christ-like, emaciated, even dying. Not to state the obvious, but we should see a little bit of dick here, but Oppenheimer uses distortion as a (brilliant) excuse to take it out of the frame. With a shadowy dark spot for genitals, Oppenheimer portrays himself entirely demasculinized, vulnerable, penetrable. He’s putting himself on display at this exhibition, offering himself humbly at our feet (like Jesus or a saint/martyr) knowing very well how vulnerable he is to our attack. Oppenheimer records this narrative of vulnerability on his pale distorted body. Like his member, his face is shrouded in darkness, leaving his body in the light–this is his gift to us, for us to destroy. Because he willingly offers himself, Oppenheimer shows the wound as a self inflicted BITE MARK. He has bitten his own Christ-wound, and, as if that weren’t enough, he digs around. Unlike Christ, this exhibition (that he promotes) necessarily makes him bleed. He’s vulnerable, and he tells us that by showing himself wounded, penetrable. This prediction of self torment proved true. Critics would accuse him of unoriginality for this poster. It was too similar to last year’s.